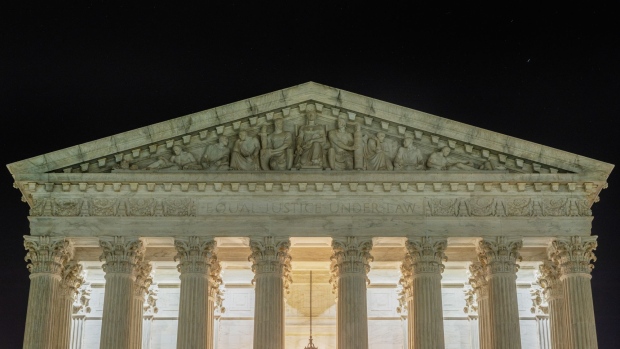 The U.S. Supreme Court building stands in Washington, D.C., U.S., on Tuesday, July 7, 2020. The court is preparing to issue the final opinions of its 2019-20 term starting today and will be ruling on congressional and New York grand jury subpoenas for President Donald Trump's financial records and on Trump's effort to carve out a broad religious exemption from the Obamacare requirement that employers and universities offer free contraceptives on their health-care plans. , Bloomberg

(Bloomberg) -- The US Supreme Court reshaped the legal landscape in dramatic ways in the past few months, and it may just be getting started.

When its next nine-month term begins in October, the nation’s highest court is scheduled to hear arguments on the use of race in college admissions, on the intersection of free speech and gay rights and on a challenge to an environmental permitting law.

In the blockbuster court year that ended Thursday, conservative justices used their 6-3 majority to strike down federal abortion rights, remove some limits on gun permits, curb federal regulatory power and blur the line between church and state.

“Last term saw the fewest decisions from argued cases since the Civil War, and this term isn’t on track for many more,” Shay Dvoretzky, head of the Supreme Court and Appellate Litigation Group at Skadden Arps Slate Meagher & Flom LLP, said in an emailed statement. “So it’s noteworthy that these controversial issues have made the cut, suggesting eagerness among some members of the court to revisit or remake precedent in significant ways.”

The upcoming cases come for an institution that is facing waning approval and internal strife that has spilled into public view. The court is still conducting an investigation into who leaked a draft opinion of the abortion ruling in May, and justices have had to get added security as protesters picket outside some of their homes.

The court, which will include a Black woman for the first time, will consist of four members who’ve joined in the past five years. The new justices have shown they are not afraid to upend precedent -- long a key feature of American law and known as “stare decisis.” Chief Justice John Roberts warned his five fellow conservatives who voted to overturn the landmark 1973 Roe v. Wade ruling that such a drastic reversal could cause a “serious jolt to the legal system.”

Some liberal scholars say upcoming decisions by the court could impact underrepresented groups.

“You have a court who is looking to push the needle and looking to move the law to the right in very stark ways,” said David Gans, a civil rights lawyer at the progressive Constitutional Accountability Center.

But others argue that the court has taken a more moderate approach.

“We have not seen the kind of radical revolution that some people are claiming occurred,” said Ilya Somin, a law professor at George Mason University.

With the exception of the abortion case, other decisions by the Supreme Court have been much more incremental, Somin said. For example, when the court struck down a New York law that required citizens to show a special need to carry a handgun in public, it made clear that a wide range of regulations would still be permitted, he said.

The 2022-2023 court term includes several cases that will test the court’s commitment to precedent. Among the cases to watch:

For years, universities have been able to take race into account in their admissions process, which the Supreme Court affirmed in a 2003 decision. But the current court agreed to take up challenges to admission policies at Harvard College and the University of North Carolina.

A special interest group called Students for Fair Admissions accused Harvard of favoring Black and Hispanic applicants over Asian Americans. Lawrence Bacow, Harvard’s president, has said eliminating race as a factor would make it more challenging for the school to create a diverse student body. In the North Carolina case, the Supreme Court took the rare step of intervening before a trial judge’s decision made it to the appellate level.

“The cases may offer additional insight into where the court is on stare decisis,” said Greg Garre, a partner at law firm Latham & Watkins and a former solicitor general who successfully argued a 2016 case before the court upholding the race-conscious admissions program at the University of Texas.

The court will hear an appeal from a website designer who said she refused to start creating pages for same-sex weddings because doing so would be at odds with her faith. The case bears similarities to a 2018 decision in which the justices sided with a Colorado baker who refused to make cakes for gay weddings, although the court avoided a ruling that would allow business owners to turn away customers on religious grounds.

Lorie Smith, a Colorado resident, is challenging a state law that prohibits businesses from discriminating on a variety of factors, including sexual orientation. Smith, who lost the case on appeal, argued that the law infringed on her right of free speech because it required her to communicate messages that were at odds with her faith, and because it kept her from posting a statement that explained her beliefs.

While Smith has invoked her religious rights, the justices have indicated that their focus on her case will be free speech.

The first case that will be argued on Oct. 3 involves a couple that has put up a 15-year fight to build a house on property that federal regulators say is protected wetlands. A ruling in their favor could let developers build more houses without having to get federal permits and give companies more flexibility on where they can dispose of pollutants.

A 2006 ruling by the court left ambiguity around when the Clean Water Act should be applied to wetlands. At the time, four justices, led by Antonin Scalia, concluded that the law covered wetlands only if they have a continuous surface connection to a river, lake or other major waterway. Justice Anthony Kennedy offered up a different standard that applied to wetlands with a “significant nexus” to one of those large bodies of water. The couple is asking for the Supreme Court to adopt Scalia’s definition, after a federal appeals court judge last year ruled that the Clean Water Act governed their property.