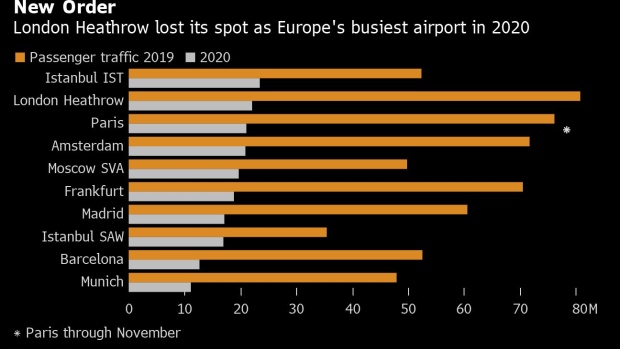 A traveler arrives at London Heathrow Airport in London, U.K., on Monday, Jan. 18, 2021. U.K. ministers have closed travel corridors with other countries from Monday, meaning that all visitors from overseas will require a negative test result within 72 hours of travel to enter Britain. , Bloomberg

Paris-Charles de Gaulle, the second-busiest airport in Europe during 2019, stood slightly ahead of its London rival as of the first 11 months of 2020. It reports its full-year data later Monday.

The virus outbreak and the resulting travel restrictions have battered European airlines since March. A push to replace country-specific entry curbs with pre-flight testing has unraveled with the rise of more-infectious strains in the U.K. and elsewhere.

Britain’s quarantine mandate and a shifting list of exempted countries have also discouraged travel to London. The government last week tightened further, halting all flights from South America and extending the self-isolation requirement to arrivals from all countries.

New lockdowns mean travel will remain difficult for some time. Italy extended its state of emergency into April, while Austria’s will run into February, with Germany set to follow suit.

Starting Monday, travelers coming into France from outside of the EU will have to be tested prior to boarding, agree to self-isolate for a week upon arrival and then take another test.