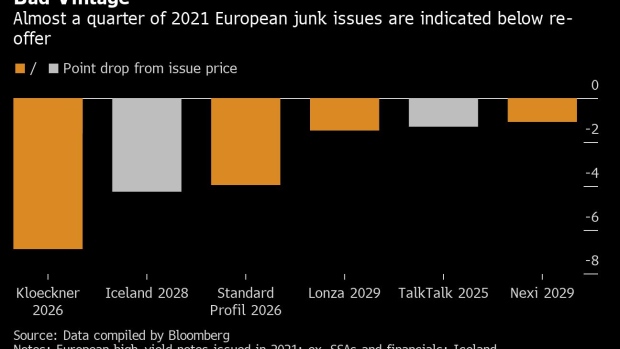 (Bloomberg) -- Fears of rising interest rates and warnings over bond valuations have made junk- and investment-grade rated bonds a popular short bet among hedge funds.

Speculators are predicting fresh pain for the bond market, especially for longer-dated bonds with sovereign yields being tipped to rise due to an increase in inflation forecasts. This comes amid warnings from market experts regarding the “over-extended” valuations of CCC-rated bonds, the riskiest class of debt.

Global high-yield bonds worth as much as $55 billion are on loan to traders seeking to profit if prices drop, according to data from IHS Markit Ltd., by a narrow margin the largest balance since the fall of 2008. This compares with about $35 billion at the start of the year.

In the euro-denominated investment-grade market, roughly $30 billion equivalent of bonds have been borrowed, the largest loan balance since early 2014.

“I would expect that list to get bigger as spreads tighten and/or people get worried about rates rising,” said Tim Winstone, a portfolio manager at Janus Henderson, which oversees 294 billion pounds ($409 billion). “At these levels of valuations, I’m not surprised more people, such as hedge funds, are setting shorts.”

The trend is having an impact on the performance of deals in the secondary market. Almost one out of four high-yield bonds sold this year is indicated below the price it was issued at, based on data compiled by Bloomberg.

The trend has been attributed to so-called fast money from hedge funds that seek to sell the debt quickly at a profit, or with an interest to short.

A 275-million-euro deal by Standard Profil Automotive GmbH fell four cents on the euro just days after pricing in the primary market last week. The deal is one of the worst performers among 2021 issues, trailing only two notes from retailer Iceland and packaging group Kloeckner Pentaplast.

Investors are building up defenses against a potential scaling back of central-bank support. While the Federal Reserve maintains it isn’t ready to discuss a tapering of asset purchases yet, investors bet the U.S. central bank will come under pressure to do so later this year. Meanwhile, the European Central Bank could decide to prune its emergency bond-buying program as early as next month if the euro-area economy doesn’t deteriorate.

On Thursday however, the Bank of England said it doesn’t intend to tighten until there’s clear evidence of rebound. Yields on 10-year U.K. government bonds have fallen for four of the past five weeks and risk premiums in sterling company debt traded near post-financial-crisis lows.

Yet, investors are also seeking to taper-proof their portfolios with the turbulence of 2013 still fresh in their minds. The Fed warned Thursday that rising appetite for risk is stretching valuations and creating vulnerabilities in the U.S. financial system.

Some say the shorting strategy is premature.

“Shorting cash corporate bonds just for spread widening is very expensive,” he said. “You are better off expressing that view through CDS, either in single names or indices.”

European credit risk is in focus after macroeconomic data from the world’s largest economies showed a recovery is well under way.

Issuers from the aviation industry were in focus in Asia’s primary dollar bond market on Thursday with BOC Aviation offering 3-year notes and Cathay Pacific mandating banks for dollar debt sale which would be its first since the 1990s.

EQT agreed to acquire all of the membership stake in Alta Resources Development’s upstream and midstream subsidiaries for about $2.925 billion, to be funded with cash on hand, drawings under our revolving credit facility and/or through one or more debt capital markets transactions