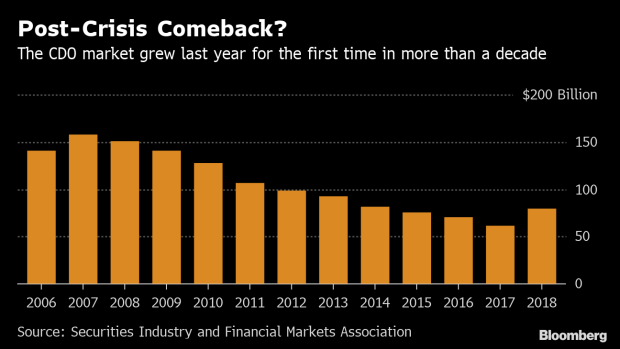 (Bloomberg) -- Hedge funds and other investors are reviving a type of securitized product that blew up during the financial crisis. This time around they’re convinced that the structures will not only weather the next downturn, but might even profit from it.

Money managers are resurrecting collateralized debt obligations that bundle risky bonds and loans into new, higher-rated securities. Issuers such as Anchorage Capital Group and Fortress Investment Group are betting tweaks to the products will allow them to keep enough cash on the sidelines that, when the next slowdown hits, they’ll be able to swoop in and buy the most beaten-down debt on the cheap.

The expansion of the asset class is another example of how money managers are bracing for a slump despite the credit market’s resiliency in recent years. They’re also making tweaks to collateralized loan obligation structures -- such as boosting their capacity to hold lower-rated debt -- in preparation for a potential jump in rating downgrades. New entrants include Blackstone Group’s credit hedge fund, which sold its first post-crisis CDO late last year, and B. Riley Capital Management, which is starting up a unit to issue the securities.

“Now is the time you have to be active,” said Tim Gramatovich, who joined B. Riley in March to lead its CDO efforts. “We see the opportunity set in secondary loans, with a healthy dose of bonds.”

Issuers say today’s CDOs bear little resemblance to the ones that helped nearly bring down the global financial system. For starters, they argue that corporate debt is far less risky than the subprime mortgages and credit derivatives that ended up in the securities a decade ago. CDO issuers are also more restricted in how much borrowed money they can use to juice returns, both compared to previous years and what’s permissible in a CLO.

On the flip side, the hybrid CDOs that these firms are issuing can include corporate bonds as collateral, which by their nature get hit harder than loans during times of market turmoil. Hedge funds are wagering that the ability to buy the most depressed debt will ultimately produce outsized returns as they put their undeployed capital to work in a credit cycle shift.

CDO issuers can generate annual returns of around 20 percent in a downturn through a combination of management fees and their stakes in the riskiest slices of the securitizations, and about half that during calmer markets, said a person familiar with the structures who asked not to be named discussing private transactions.

Many of the funds issuing CDOs that buy bonds and loans are already major players in the market for CLOs, including Palmer Square Capital Management, which sold its first CDO in February.

The market for these CDOs remains tiny post-crisis, with about $10 billion sold since 2015, according to data compiled by Bloomberg. That compares with CLO issuance of nearly $300 billion over 2017 and 2018 as managers packaged leveraged loans from corporate borrowers into securities.

Yet the amount of outstanding CDO debt grew last year for the first time in more than a decade.

Some investors worry about how well CDO structures can hold up during a crisis. When companies default, recoveries on bonds have historically been lower than loans.

“We’re not advocating adding them, generally speaking, in our general accounts,” said David Goodson, head of securitized products at Voya Investment Management, which oversees $205 billion. “We’ve seen some things that we think are pushing the envelope.”

For others, the returns can be too good to pass up. The AAA rated slice of a CDO Anchorage sold in February pays 4.6 percent, a level on par with the average double-B rated note. And there are few corporate alternatives for investors seeking the highest-quality fixed-rate debt. Only about 10 percent of U.S. investment-grade company bonds carry AAA or AA ratings, according to Bloomberg Barclays index data.

CDOs may also be drawing increased interest from investors as the Federal Reserve signals its intent to keep interest rates on hold. The securities pay a fixed coupon, unlike CLOs which pay floating. The fixed-rate payments and top ratings some tranches command have made them attractive to many insurance companies that match investments with their liabilities.

Insurers like Global Atlantic Financial Group Ltd. and American International Group Inc. are among those buying the securities, according to holdings statements.

“During the crisis, a lot of these CDO structures blew up,” said Jason Merrill, an investment specialist at Penn Mutual Asset Management, which oversees about $26 billion, largely on behalf of insurers. “It’s surprising to me that people have such short memories.”

--With assistance from Katherine Chiglinsky.

To contact the reporter on this story: Claire Boston in New York at cboston6@bloomberg.net

To contact the editors responsible for this story: Nikolaj Gammeltoft at ngammeltoft@bloomberg.net, Boris Korby, Dan Wilchins