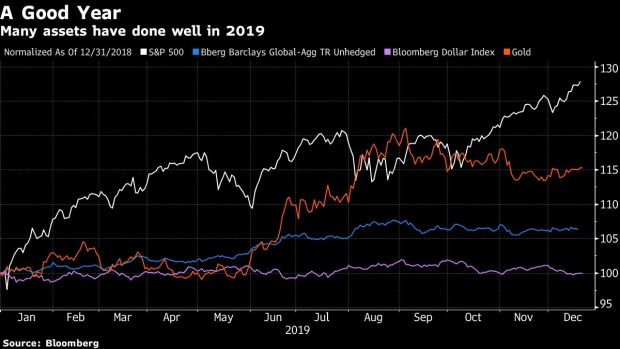 (Bloomberg) -- While many people are making lists of New Year’s resolutions or presents they’d like from Santa Claus, another much more intimidating tally has come out as well.

Morgan Stanley Wealth Management has released a list of 10 geopolitical risks looming for markets in 2020 that are “keeping us awake,” according to authors led by Scott Helfstein.

Some of the scenarios are all too familiar to investors in a year that’s seen its share of uncertainty -- but is on track to end with most asset classes faring pretty well.

Here’s the full list, from most to least likely:

“There is never a shortage of events that could weigh on financial markets,” the strategists wrote. “Most years, investors prove resilient and look through these risks to push assets higher.”

Some of the ideas might seem surprising, like gene editing -- but that made the list given things like the news that a researcher in China had tried to immunize babies from HIV. The recent experiments “may involve questions about what it means to be human,” the report said.

Others, like emergence of competing trade blocs and U.S. election volatility, will be familiar to anyone who has been paying attention this year. Indeed, the leadership-storm idea and trade-bloc entry were on the late-2018 list also.

The strategists even included a recap of their list from last year. While in 2017, just four of the 10 items on their list went on to affect markets, the 2018 compilation included three that were “important” for markets and four that were “fairly prescient,” with just three missing the mark.

To contact the editors responsible for this story: Christopher Anstey at canstey@bloomberg.net, Margo Towie