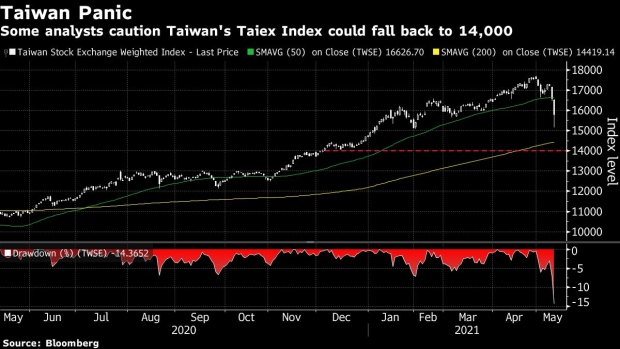 (Bloomberg) -- A collapse in investor confidence, fears about a coronavirus resurgence and concern over the outlook for technology shares helped trigger a wave of panic selling in Taiwanese stocks Wednesday, according to market participants.

While some saw the move as overdone and expect the benchmark Taiex Index to recover, others pointed to its strong recent performance and suggested it could fall further to as low as 14,000. The Taiex fell as much as 8.6% to 15,165 Wednesday amid a rush of activity in the options market.

Here’s what market participants are saying about the plunge:

“Investor confidence in the Taiex collapsed due to concerns over Covid-19, after the health minister said it’s possible for Taiwan to escalate its alert level for Covid-19,” said MasterLink Securities Investment Advisory President Paul Cheng. “And there are some concerns over tech shares especially for the 2H outlook, due to factors including rising manufacturing costs and lower margins.”

“Three indicators to watch if investor confidence stabilizes: if foreign investors add on dips, if the national stabilization fund will meet to discuss supporting markets and if margin trades reduce significantly,” Cheng added. “Margin trading boosted the Taiex over the past few months, which may add to declines if they face margin calls.”

Margin Traders May Get the Blame for Taiwan’s Stock Collapse

“People are just selling what they have very emotionally,” said Capital Investment Management vice president Alan Tseng. “It’s like how they were buying stocks for no reason in April. The market is pricing in a scenario that this is the end of the world in Taiwan. The market should rebound quickly when sentiment calms down.”

“The recent panic sell-off made TSMC fall below the level that’s been supported by the government earlier. So that adds to the fears,” Tseng added. “I think the government will still do something around NT$550 ($19.63) to support TSMC shares and the share price should stabilize around this level in the near future after today’s drop.”

“If the pandemic is still out of control and cities are all locked down, the Taiex may test the support at the annual moving average at around 14,000,” said Diana Wu, a senior manager at Capital Securities Corp. “Investors are speculating the government may support the market soon.”

“Compared with other countries, Taiwan’s epidemic situation is not serious. After a day or two of digestion, the market is expected to rebound,” said Li Fang Kuo, chairman of President Capital Management. “Today’s market is overreacting, and it’s wrong.”

“After the sharp drop, it may be a slow rise, and we are still optimistic about the overall Taiwan stock market,” Li added.

“Taiwanese equities were under pressure in any case due to the sell off in tech and the ongoing impact of selloff of the ARK ETF,” said Gary Dugan, chief executive officer at Global CIO Office. “I think the market is vulnerable down to 15,000 in the near term on the lock down, with a risk of 14,000.”

Although the demand outlook is “still solid, component shortages in the IT hardware supply chain still show no sign of remission in next 3 months,” Shum added.