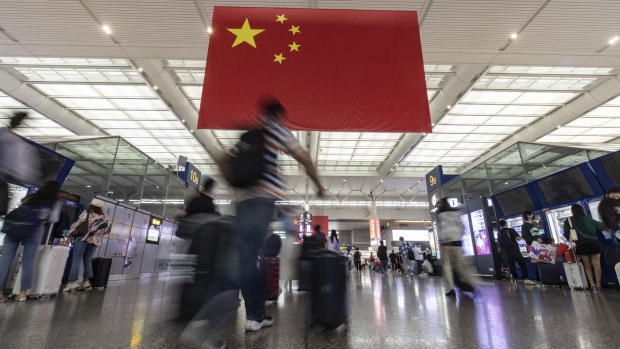 Travelers at Shanghai Hongqiao Railway Station ahead of the Golden Week holiday in Shanghai, China, on Friday, Sept. 30, 2022. China bumped up its injection of short-term liquidity by more than nine times this week, signaling its resolve to avoid a cash squeeze during the Golden Week and in the run-up to the Communist Party’s twice-a-decade leadership summit. Photographer: Qilai Shen/Bloomberg , Bloomberg

(Bloomberg) -- China’s Covid-19 cases climbed to the highest in more than two weeks as outbreaks during a week-long holiday dash hopes of keeping a tight lid on the virus ahead of the politically significant Party Congress.

Nationwide, there were 909 infections for Tuesday, with 273 reported in Inner Mongolia. Residents in parts of the provincial capital Hohhot, as well as other cities, were ordered to stay at home or within their residential compounds. Manzhouli city and Linxi county were locked down after each detecting one infection.

The region’s party chief, Sun Shaocheng, said in a briefing on Saturday that authorities would stamp out transmissions by “killing chickens using a knife for killing cows”, a phrase meaning to use excessive efforts for a small task. Infections must be contained and especially cannot spread to Beijing, he said.

The rise during this week’s National Day holiday is stoking concerns about whether tough Covid curbs may be deployed more widely in the lead up to the Party Congress, which begins mid-October and is expected to see President Xi Jinping secure a precedent-breaking third term in power. Xi has made Covid Zero a cornerstone of his leadership, and Beijing views the measures as key in averting the death tolls seen in other parts of the world despite its growing social and economic costs.

The flareups also indicate many people didn’t heed advice from authorities to not travel during the holiday and raises the risk of residents carrying infections back home with them. Beijing posted three cases for Tuesday, including one visitor from Inner Mongolia, though all were detected in quarantine.

Many places around the country have stepped up control measures to minimize infection risks, leading to travel chaos as tourists become stranded or have their plans disrupted due to quarantine or testing requirements.

Xinjiang’s capital Urumqi banned people from leaving the city on Tuesday, while passenger train services and long-distance coaches have been suspended. In Yunnan province, hundreds of tourists were stranded in the airport in Xishuangbanna after the prefecture went into lockdown on Tuesday. Unverified videos posted on social media showed people arguing with workers dressed in personal protective gear in the airport, as well as officers with guns and shields.