More than a month into the summer movie season, one thing has become clear: Many of Hollywood’s sequels, reboots and reimaginings are falling flat.

So far, the shortfall hasn’t claimed any of the summer’s biggest tentpole films. And Eric Wold, an analyst at B. Riley FBR, still expects higher ticket sales through the balance of the year to deliver a record 2019. But the results also show that fans are getting pickier about the glut of sequels that Hollywood studios have force-fed movie moviegoers for years. 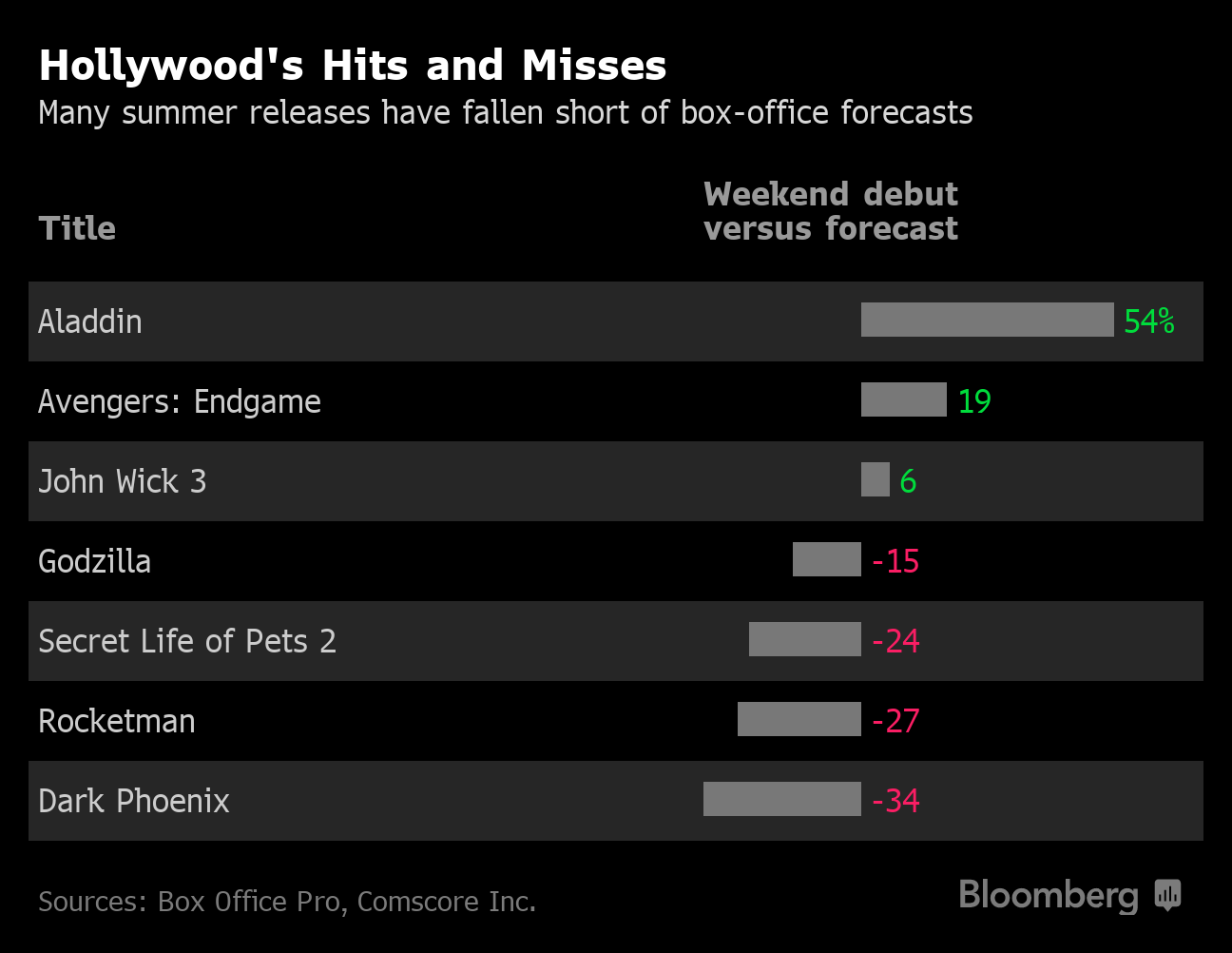 “Audiences are savvy enough to wait for the home market, especially with so many great streaming choices this summer,” said Jeff Bock, an analyst with Exhibitor Relations Co. “That’s something Hollywood will be contending against for years to come.”

Sequels and reboots need to be more compelling to draw in fans, Bock said. “Many of them aren’t upping the ante or raising the stakes significantly enough,” he said.

Hollywood studios have turned movie serials, now dubbed franchises, into an art form — with film series built around comic-book figures, action-hero revivals and classic cartoon characters. And no one has been more successful at this task than Disney.

But even Disney’s biggest hits aren’t doing quite as well as predicted. The Marvel finale Avengers: Endgame racked up US$2.73 billion in box-office sales globally and looked likely to dethrone Avatar as the top-grossing movie of all time. Now — following a drop-off in attendance — it will have to settle for second place.

“It looks like Avatar will hold onto the title,” Bock said, “unless Disney snaps their fingers and springs an alternate ending re-release in the near future.”

Bock cites a number of reasons for all of the misses. No one cared about the humans in Godzilla, he said, and The Secret Life of Pets 2 didn’t “bring anything new to the table.”

Missing estimates in a debut weekend doesn’t necessarily mean a feature won’t be profitable. Movies like Rocketman, with smaller production budgets, are expected to make money.

Dark Phoenix, an X-Men film, is emerging as one of the summer’s bigger duds. It suffered from production and story problems, along with muddled marketing that left audiences confused by the trailer, Bock said. The film cost about US$200 million to make, plus tens of millions more to market, suggesting it will have trouble turning a profit.

So far, summer sales are up about 14 per cent, according to Wold. That’s helped theater owners recover from a sharp decline earlier in the year. For 2019 to date, domestic sales through last weekend were down six per cent from a year earlier, according to Comscore Inc.

“Sequels can obviously be successful — there wouldn’t be 20 of them this summer if Hollywood thought otherwise,” Bock said. “However, the ones that have opened below expectations were ill-conceived and/or flimsy films. In other words: lazy sequels.”

Wold said a successful summer season hinges on a few big releases still to come: The Lion King and Toy Story 4 from Disney, a Fast and Furious spinoff from Comcast Corp.’s Universal studio, and a new Spider-Man release from Sony Corp.

“You’ve got at least four titles through the remainder of the summer period which should do very well,’’ he said.