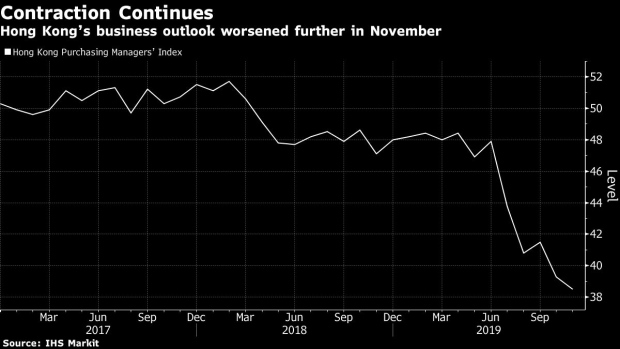 (Bloomberg) -- Hong Kong’s business outlook worsened further in November with the city mired in recession amid ongoing protests and a volatile macroeconomic picture.

The purchasing manager’s index for the whole economy fell to 38.5 for the lowest reading since April 2003, down from 39.3 a month ago, according to IHS Markit, which surveyed about 400 private sector companies. The gauge has now been below the 50 level that divides expansion and contraction since April 2018.

“November PMI data indicated that Hong Kong’s private sector suffered its worst downturn since the 2003 SARS crisis, with the latest survey indicators painting a picture of gloom,” wrote Bernard Aw, principal economist at IHS Markit, in the report. The combined PMI readings for October and November put the economy on track to contract more than 5% in the fourth quarter barring a significant rebound in December, he said.

Economic momentum in the city has quickly evaporated under pressure from almost six months of ongoing protests. The U.S.-China trade war has also put a damper on global trade, with Hong Kong’s status as an important goods port leaving it vulnerable to the hostilities.

Retailers have been among the hardest hit industries during the months of unrest in Hong Kong. Data Monday showed retail sales by value suffered a record contraction in October as Mainland Chinese tourists avoided the city during the Golden Week traveling season. Visitor arrivals from China to Hong Kong plunged the most on record.

Financial Secretary Paul Chan on Monday forecast the city’s first budget deficit since the early 2000s, while Chief Executive Carrie Lam pledged on Tuesday that there would be additional relief measures to prop up the city’s flagging economy, without providing details.

To contact the editors responsible for this story: Christopher Anstey at canstey@bloomberg.net, James Mayger