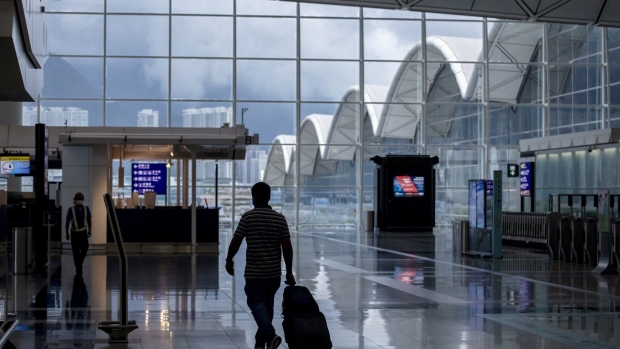 A traveler in the deserted hall at Hong Kong International Airport in Hong Kong, China, on Tuesday, Aug. 10, 2021. Hong Kong started to allow vaccinated tourists from all but 10 places in the world to enter the city on Aug. 9, a significant easing of some of the tightest border curbs in the world. , Bloomberg

(Bloomberg) -- Two cases of the new Covid-19 strain raising alarm in parts of southern Africa have been found in travelers arriving in Hong Kong.

A traveler from South Africa was found to have the variant -- currently known as B.1.1.529 -- while the other case was identified in a person quarantined in the hotel room opposite them, the Hong Kong government said late Thursday. That person may have been infected as air flowed between the rooms, according to the government.

B.1.1.529 carries an unusually large number of mutations and is “clearly very different” from previous incarnations, Tulio de Oliveira, a bio-informatics professor who runs gene-sequencing institutions at two South African universities, said at a briefing on Thursday.

South Africa’s Health Minister Joe Phaahla said the mutation was “of serious concern.” Virologists detected almost 100 cases linked to the variant in the country to date, said Anne von Gottberg, clinical microbiologist & head of respiratory diseases at the National Institute for Communicable Diseases. World Health Organization officials have met to discuss the virus, which has also been detected in Botswana.

In Botswana -- a neighbor of South Africa -- the new variant has been detected in vaccinated people, Kereng Masupu, coordinator of the Presidential Covid-19 Task Force, said in statement. The U.K. said late Thursday local time that it will temporarily halt flights from South Africa and five neighboring countries on concerns about B.1.1.529.

Twelve people who were staying in rooms close to the two Hong Kong cases are undergoing compulsory 14-day quarantines at a government facility, according to the statement Thursday.

Hong Kong is one of the few places in the world that’s yet to have a recorded community outbreak of delta, the more contagious variant first detected in India that has now become the dominant strain worldwide. The mutation has forced some countries who were able to keep Covid out through quarantines and border curbs in 2020 to abandon that approach, instead pivoting to treating the virus as endemic.