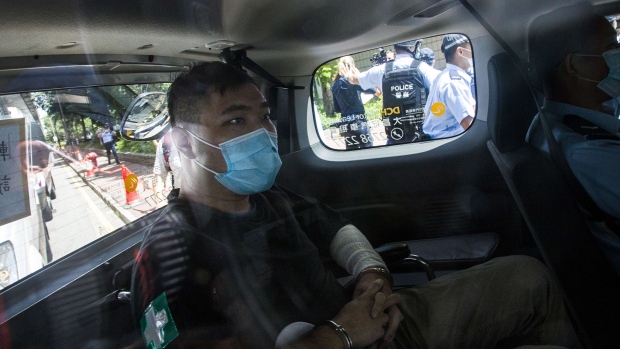 Hong Kong defendant Tong Ying-Kit, 23, arrives at court after being accused of deliberately driving his motorcycle into a group of police officers last Wednesday on July 6, 2020 in Hong Kong, China. Tong is the first person to be charged for incitement to secession and terrorist activities under the Hong Kong national security law. (Photo by Getty Images/Getty Images) , Source: Getty Images

(Bloomberg) -- A Hong Kong court sentenced the first person convicted under a national security law imposed by Beijing to nine years in prison, a ruling that illustrates the high stakes for dozens of pro-democracy activists awaiting similar trials.

Tong Ying-kit, a waiter, faced as long as life in prison after being found guilty of incitement to secession and engaging in terrorist activities earlier this week. The convictions stem from an incident last year when Tong drove a motorcycle carrying a flag with the banned protest slogan “Liberate Hong Kong; revolution of our times” into a group of police officers, injuring three.

Tong was sentenced to 6.5 years for the secession charge and another eight years for the terrorism offense, served concurrently in part for a total of nine years in prison, a three-judge panel found in a ruling read out Friday in High Court.

Some 76 pro-democracy activists, former politicians and journalists are awaiting trial after being charged under the legislation, according to the police bureau that handles national security matters. That figure includes student activist Joshua Wong, who was the subject of a Netflix documentary, and Jimmy Lai, the media mogul whose pro-democracy newspaper was recently forced to close.

The sentence was being watched for clues on how courts in the financial hub will interpret the security law, which outlaws secession, subversion, terrorism and colluding with foreign forces. Beijing handed down the legislation a year ago without any debate by local lawmakers following large and occasionally violent protests in the Asian financial hub in 2019. China says the law has helped prevent a repeat of the unrest that shook the city for months.

The Group of Seven nations said Beijing failed to meet the terms of its handover agreement with the U.K. by forcing the legislation on Hong Kong. The U.S. responded to the law by rolling back some special privileges granted to the city, in part making it harder to export sensitive American technology to Hong Kong, and sanctioned senior officials who oversee the territory.

Tong has been held without bail for more than a year. He had pleaded not guilty over the incident, which occurred hours after the law was enacted and police banned the slogan he displayed.

Prosecutors asked High Court judges Anthea Pang, Esther Toh and Wilson Chan at a hearing Thursday to refer to mainland Chinese laws when considering a jail sentence for Tong. The judges, who were selected from a panel chosen by Chief Executive Carrie Lam, responded that they would follow Hong Kong law.

Tong’s defense lawyer, Clive Grossman, asked the judges for leniency, saying the public already understood the seriousness of the case.

The phrase “Liberate Hong Kong; revolution of our times” has been shouted and displayed on flags by tens of thousands of protesters in the city over the past two years. Pro-democracy activist Nathan Law said the court’s ruling that the phrase could incite secession amounted to criminalizing speech.

The judges added that by riding his motorcycle into police, Tong sought to intimidate members of the public as part of his “political agenda.”