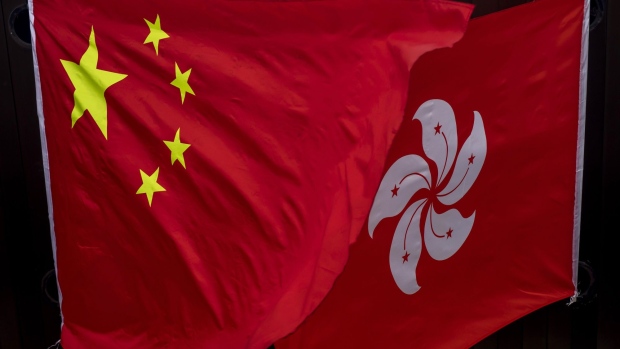 The flags of China, left, and of the Hong Kong Special Administrative Region (HKSAR) are displayed on a street in the Tsim Sha Tsui district in Hong Kong, China, on Monday, June 29, 2020. The national security law that China could impose on Hong Kong as early as this week won't need to be used if the financial hub's residents avoid crossing certain "red lines," according to Bernard Chan, a top adviser to Hong Kong Chief Executive Carrie Lam. Photographer: Paul Yeung/Bloomberg , Bloomberg

(Bloomberg) -- Hong Kong plans to expand scrutiny on capital flows and transactions by Chinese officials, according to a recent consultation paper on anti-money laundering.

The Financial Services and the Treasury Bureau is proposing to implement enhanced due diligence on “politically exposed persons” from anywhere outside Hong Kong instead of outside the People’s Republic of China, according to the paper.

The Asian financial hub is seeking to enhance compliance of anti-money laundering regulations ahead of a series of assessments in the next few years. The proposed amendments come as the ruling Chinese Communist Party adopts an increasingly tough stance on corruption among government cadres and corporate executives. More than 1.5 million government officials have been punished in China’s years-long campaign.

Hong Kong financial institutions and designated non-financial businesses and professions are required to conduct enhanced due diligence on foreign PEPs as well as their family members and close associates due to the higher money laundering and terrorist financing risks. The current rules refer PEPs to individuals holding government roles by a foreign country.

As part of the proposals, Hong Kong seeks to tighten requirements for virtual asset trading operations and introduce a two-tier registration regime for business dealings in precious-asset-based instruments, according to the consultation paper.