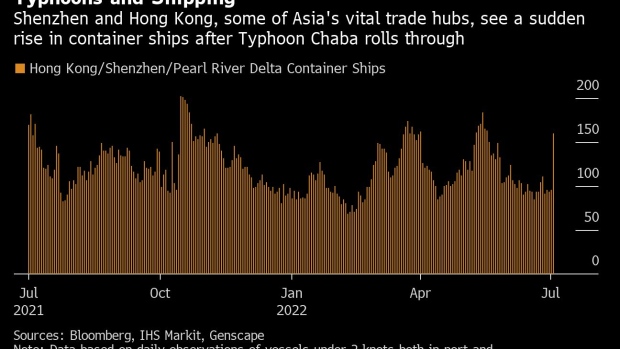 (Bloomberg) -- Typhoon Chaba has upset shipping after passing through the Hong Kong area over the weekend, creating a blip for supply chains that are still recovering from the effects of China’s Covid-19 lockdowns earlier this year.

The number of container ships off Hong Kong and Shenzhen jumped 67% in the wake of the typhoon. A total of 160 ships, the most since May, are now in port or in the combined anchorage area off Hong Kong. That compares with 96 vessels on Friday. The city, combined with Shenzhen and the inland ports of China on the Pearl River, forms a major Asian trading hub.

Chaba, with winds of more than 140 kilometers per hour, triggered the highest typhoon warning signal so far this year for Hong Kong. The storm, which has weakened into a tropical depression, is still expected to bring heavy rain in the central and eastern part of China, according to Channel News Asia.

A high of 202 container ships were counted by Bloomberg off Hong Kong when Typhoon Kompasu struck in October and closed the Hong Kong stock market.

No impact to China’s largest hub of Shanghai has been seen. Further north, Typhoon Aere is expected to make landfall in southwest Japan on Tuesday, according to Kyodo News.