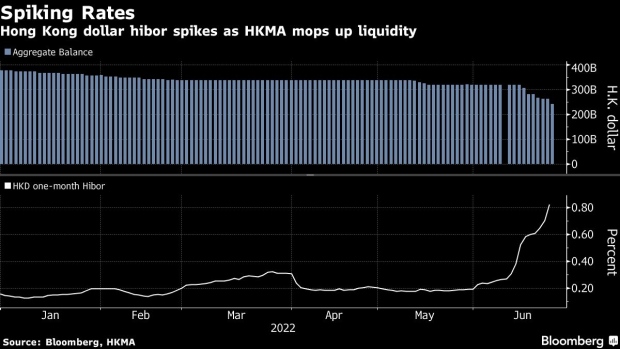 The one-month Hong Kong Interbank Offered Rate, or Hibor, rose to 0.82% from 0.18% a month ago. The increase came as the Hong Kong Monetary Authority aggressively purchased the local currency to prevent it from falling past the weak end of its 7.75-to-7.85 per greenback trading band. The move was aimed at capping outflows by shrinking city’s interest-rate gap with the US.

“We may see more upside for the Hibor in September and December amid quarter-end and year-end demand,” if the interbank liquidity pool keeps shrinking on intervention, said Carie Li, global market strategist at DBS Bank Ltd. She sees the one-month rate to climbing to a two-year high of 1.9% at end-September and to 2.28% by the end of 2022.

The HKMA’s interventions have reduced the city’s aggregate balance -- a gauge of interbank cash supply -- nearly 30% in less than two weeks to HK$233.3 billion ($29.7 billion). The one-month hibor rose to a two-year high this week but it’s still 80 basis points below the US equivalent. Analysts have forecast that the HKMA may have to drain at least $16 billion defending the city’s currency peg as the dollar surges on US rate hikes. It’s spent about $13 billion since May.

While Hong Kong imports the Federal Reserve’s monetary policy due to its currency peg on the US dollar, the city’s interbank rates haven’t climbed quickly enough to catch up with US borrowing costs. That creates a lucrative trading opportunity for hedge funds, who can borrow the Hong Kong dollar cheaply and sell it against the higher-yielding greenback. This means the HKMA is obliged to keep mopping up cash supply to support the local exchange rate.

A sustained increase in one-month Hibor, which is the reference rate for the Hong Kong’s mortgage loans, could turn into yet another risk for an economy that’s already being disrupted by strict Covid restrictions. The city’s government recently downgraded its economic growth forecast to a range of 1%-2% for the year, although banks like Goldman Sachs Group Inc. see expansion of just 0.3%.

DBS isn’t alone in predicting further increases in Hibor. Bank of America Corp. forecasts the one-month rate to climb to 1.8% at end-September and 2.5% by year-end, strategist Chun Him Cheung wrote in a note on Thursday. He sees the one-month Hibor reaching parity with the upper end of the Federal Reserve funds rate of 4.25% by the end of the second quarter of 2023.

“Risks are skewed toward an even faster HKMA draining cycle given the large steps the Fed is currently taking,” said Cheung. “Due to this uneven risk profile, we continue to like being exposed to the upside in Hong Kong dollar rates.”