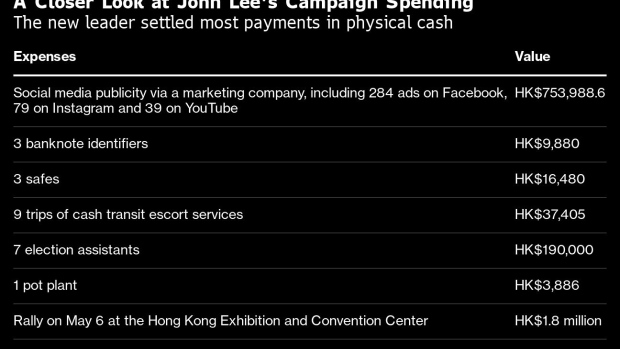 (Bloomberg) -- Hong Kong’s new leader John Lee received more than HK$11 million ($1.4 million) in physical cash when he ran unchallenged for the city’s top job in May while under US sanctions, according to a filing.

The document, made public Monday by Lee to the government’s Registration and Electoral Office, demonstrates the creative ways in which the former police officer was able to run an election campaign without access to a bank account, including procuring banknote identifiers, safes and cash transit escort services.

His campaign expenditure included over 400 advertisements on US-owned social networks, despite YouTube and Facebook suspending services for Lee due to the sanctions. The filing, however, suggests that traditional donors to chief executive hopefuls, including the city’s tycoons, were cognizant of the risk of being ensnared in those restrictions.

Lee was chosen as the city’s next chief executive by an elite committee of 1,461 Communist Party loyalists, after China last year revamped the financial hub’s electoral system to make it all but impossible for an opposition candidate to compete. The security-minded official’s endorsement by Beijing demonstrated its continuing focus on crushing dissent in Hong Kong in the wake of the 2019 protests.

Lee and other top Hong Kong and mainland Chinese officials were sanctioned by the US in 2020 for their roles in the crackdown on civil liberties in the city. Outgoing Chief Executive Carrie Lam revealed she had to receive her salary in cash each month as a result.

Donating in cash to a sanctioned individual “raises concerns over untraceable money trails and non-compliance, and possibly clouds the true origins of funds, which could even be from outside Hong Kong,” said Kenneth Chan, a former lawmaker and current associate professor of government at Hong Kong Baptist University.

“The fact that a candidate ran an election campaign, and took and spent money without banking services due to US sanctions, is unheard of,” he added.

According to the filing, Lee spent about HK$63,765 on equipment and services to handle physical cash. These include three banknote identifiers, three safes, and nine trips by cash transit escorts.

Lee’s campaign also spent some HK$754,000 on social media publicity via a marketing company, including 284 ads on Facebook, 79 on Instagram and 39 on YouTube during April and May. Separately, 33 WhatsApp ads were declared as rental and office expenses, without explanation of how the two things were related.

Google and Meta Platforms Inc. announced they would curtail the social media presence of Lee in late April, citing US sanctions. Facebook, which said it had to abide by US law, also blocked Lee from using its payments services. Lee referred to the sanctions as “bullying,” while one pro-Beijing lawmaker at the time said the social media companies’ restrictions were a form of interference in Hong Kong’s elections.

Meta and Google didn’t immediately respond to requests for comment.

In total, Lee spent HK$2.3 million in advertising expenses for his campaign, behind office and rental costs and election meeting fees.

With the US order putting anyone who provides “material assistance” to sanctioned individuals in potential trouble, one of the most striking details revealed by the filing was the absence of any tycoons as donors to Lee’s campaign. In previous elections, chief executive candidates raised millions from wealthy businesspeople who openly pledged their support. Donations over HK$1,000 require the name of the donor to be revealed.

Hong Kong’s business elite, many of whom have assets in the US, were no doubt cognizant of the consequences of putting their names to Lee’s campaign, said HKBU’s Chan, and were “walking a tightrope” in terms of their obligations to show loyalty to Beijing.

The only named individual donor outside Lee’s campaign team was Jeffrey Lam, who gave 6,000 medical-grade face masks to Lee’s team worth HK$17,800. Lam, who was part of the previous chief executive’s executive council, was picked to stay on in the cabinet by Lee.

Instead of wealthy individuals, so-called clan associations dominated the donor list. A total of 30 of these groups -- which represent various cities in China -- made cash donations ranging from HK$100,000 to HK$300,000, according to the filing. Together with another 29 pro-Beijing grassroots organizations, these donors gave HK$11.25 million to Lee, even leaving an excess of HK$2 million that was later donated to charity.

Clan associations traditionally acted as bridges between incoming Chinese emigrants when they arrived in the then British colony, said Victor Zheng, director of the Centre for Social and Political Development Studies at the Chinese University of Hong Kong.

For example, the Hong Kong Chiu Chow Chamber of Commerce Ltd., which gave Lee HK$300,000 in cash, counts Li Ka-shing as chief honorary chairman. The association is one of a number of groups representing people who trace their ancestry back to the city of Chaozhou in southern China, a major source of emigrants to Hong Kong and elsewhere in the world.

There was no direct evidence in Lee’s filing to show which individuals were behind the clan group donations. It also isn’t known if Lee actively avoided soliciting tycoons’ monetary support.

However, the latest electoral reforms and Beijing’s efforts to elevate a range of patriotic grassroots organizations suggests that the central government is determined to distance itself from local wealthy families in order to dilute their political influence, said Ivan Choy, senior lecturer in government at the Chinese University of Hong Kong.

“These societies rose from having nearly no political power to now constituting almost a default majority in the Hong Kong legislature as they were more intimate allies with Beijing, undermining traditional tycoons’ reach,” Choy said.