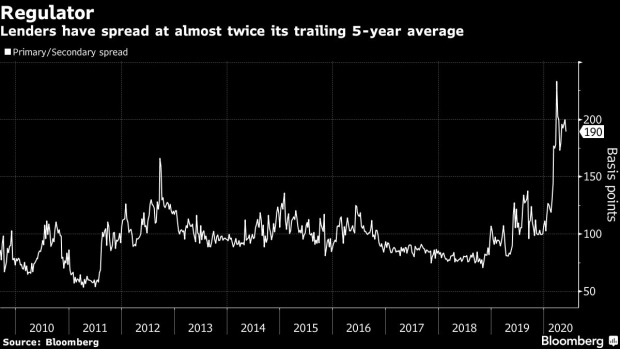 (Bloomberg) -- For Americans hoping to buy a home or refinance the one they’re in at ever-lower rates, the mortgage TBA (to-be-announced) market is where one must look. That’s where lenders can sell the mortgages they create.

Granted, the 10-year U.S. Treasury yield is closely correlated to the 30-year mortgage rate, and is often seen as a good guide to home loan rates. So while the 10-year yield has declined 1.21% this year, the 30-year mortgage rate has dropped less than half of that. But it is the yield of the so-called production TBA coupon -- and the spread at which lenders will grant a mortgage over that yield -- which matters most to borrowers.

That difference, known as the primary/secondary spread, has been trending far above its historic average in this new era of quantitative easing, and has kept mortgage lending rates higher than they otherwise would be. As of Wednesday’s close, the spread is 1.90%, almost double the 0.99% average seen over the last half decade.

This is where the legislative generosity that Congress showed in granting an easy forbearance to all homeowners with government-backed mortgages can hurt the very people it was meant to help. A loan that stops paying -- whether defined as delinquent or in forbearance -- can wipe out any profit for those who make a living offering or servicing mortgages. In addition, those loans have a much higher risk of being bought out of mortgage bond pools, potentially hurting investor returns.

Whether one looks at the record-low Freddie Mac 30-year rate (3.15%) or the Bankrate.com 30-year rate (3.57%,) it’s arguable that the added risk from forbearance has kept mortgage lenders from offering even lower rates.

The primary/secondary spread is in part a measure of how much risk lenders believe there is within mortgages -- and forbearance has certainly elevated it. As of May 17, servicers have seen 8.36% of their loans drop into forbearance, according to the Mortgage Bankers Association.

Less Help Than Before

In addition, the Federal Reserve’s ramping down of its MBS purchases suggest that ever-lower mortgage rates will be highly dependent on a tighter primary/secondary spread going forward. The central bank’s massive buying of TBA ($678 billion in just 11 weeks) has helped push lending rates lower. Yet its daily purchases have fallen to about $5 billion this month, a shadow of the recent high of just over $41 billion bought on March 27.

The main production coupon -- the 30-year 2.5% TBA -- has benefited from over $163 billion in Fed purchases since QE restarted on March 16. Yet the coupon has responded to less Fed help with a price drop from 103-31 at the end of April to 103-16 as of Wednesday’s close. (Keep in mind that lower prices mean higher yields.)

The Federal Reserve on May 11 began to purchase the UMBS 2% 30-year TBA -- they have now bought $3.6 billion -- which has helped keep that coupon’s price elevated. The coupon closed at 101-23+ Wednesday night, down 1/16 from its close the day before the central bank began to target it.

As much as the Federal Reserve buying helps push lending rates lower than they otherwise would be (because higher TBA prices lead to lower mortgage rates), the added risk of forbearance can negate this benefit, if even in part.