How Algernon Pharmaceuticals is aiming to use psychedelics to aid stroke recovery - BNN Bloomberg
{{ currentBoardShortName }}
Markets
As of: {{timeStamp.date}}
{{timeStamp.time}} 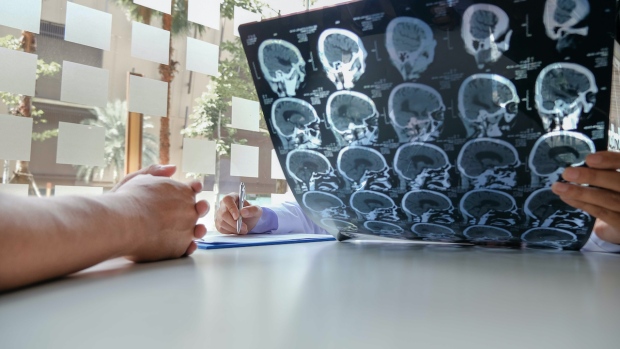 According to the CDC, in 2018, 1 in every 6 deaths from cardiovascular disease was due to stroke. , Image courtesy of Market One Media

Attitudes towards current or former illicit drugs are rapidly changing worldwide. Dozens of countries and 16 U.S. states have legalized personal possession and consumption of cannabis even as research expands into its possible health applications.

Harm-reduction proponents are studying the use of the “safe supply” of hard drugs such as heroin to help hardcore addicts. And in the U.K., government regulators recently gave the go-ahead to the first clinical trial using a psychedelic drug to treat depression.

That change in attitude toward psychedelics, in particular coupled with research to be conducted by a Vancouver-based pharmaceutical company, could be revolutionary news for stroke patients.

“You can still get neurogenesis and neuroplasticity without giving a person a psychedelic experience.”

Algernon Pharmaceuticals (CSE: AGN | OTCQB: AGNPF | XFRA: AGW) plans to begin clinical trials this year on the use of N,N-Dimethyltryptamine (DMT), a psychedelic compound known as “The Spirit Molecule,” to help treat people who have suffered ischemic strokes.

Algernon is a clinical stage drug repurposing company that looks for new applications for drugs that are known and considered safe. It is the first company globally to pursue DMT treatment for ischemic stroke in humans, says its CEO, Christopher Moreau, who has more than 30 years of senior management experience in private and publicly traded companies, including a strong background in biotechnology research.

The key for these Algernon clinical trials and the promise dimethyltryptamine presents to stroke patients, Moreau explains, is research from the Experimental Neurology Journal that shows DMT affects brain cells, aiding with rewiring, cell growth and making new connections, or neuroplasticity and neurogenesis.

Tests in labs have shown growth evidence of neuro cells when DMT was applied, he says, while animal testing demonstrated that treatment, produced in rats subjected to strokes, saw a smaller area of dead brain cells and the ability to recover motor function quicker.

And now, in preparation for the start of clinical trials with human subjects by the end of 2021, Algernon announced on February 8, 2021, that it had signed an agreement for pre-clinical research with Charles River Laboratories at its facility in Finland.

Algernon’s focus in planned and future trials is sub-hallucinogenic amounts, or microdoses, of DMT provided by continuous intravenous administration. The aim is to provide the potential brain-repairing benefits of the drug — the growth of new cells and rewiring of neural pathways — without the patient entering into the realm of the psychedelic experience.

And, if it is confirmed in the company’s pre-clinical research phase that DMT could be used to treat both haemorrhagic and ischemic strokes, a patient would not have to wait for a CT scan and treatment could begin immediately — even, possibly, in an ambulance en route to the hospital.

“You can still get neurogenesis and neuroplasticity,” Moreau says, referring to results of previous animal testing, “Without giving a person a psychedelic experience.”

But in addition to not wanting a stroke patient to also experience a psychedelic trip, microdosing may make a potential treatment easier to approve by licensing authorities.

“As you deal with people in authority making decisions about laws and regulations, if they feel that a using a particular drug is counter to their personal beliefs in some way, that could restrict the speed with which drug trials get approved,” Moreau explains. You also need to keep in mind that that even once a new drug or application of an existing drug is approved, doctors still need to be convinced it’s appropriate for their patients.

Should Algernon’s trials succeed and it’s able to break barriers for therapeutic uses of psychedelics such as DMT, the potential number of patients is massive.

According to the Centers for Disease Control (CDC), more than 795,000 people die each year in the United States due to a stroke — and for more than three quarters of those victims, it’s their first stroke. As well, about 87 per cent of all strokes are ischemic, in which a blockage in an artery decreases blood flow and oxygen to the brain, leading to damage to or death of brain cells.

The CDC also says stroke-related costs in the U.S. alone — including health care services, medicines and missed work — were almost USD$46 billion in 2014 and 2015.

Beyond the dollar costs are the human costs, the CDC reports, as strokes are the leading cause of long-term disability, reducing stroke survivors’ mobility in more than half of the cases.

The potential global market for a successful stroke treatment, then, is large and growing along with an aging population — it was estimated at USD$8 billion in 2018 and is expected to reach USD$15 billion by 2027.

As well, the timeline for developing DMT as a stroke treatment may be compressed compared to other drug trials in which the effects and study periods take place over a long period. As a DMT trial will involve an acute treatment, by enlisting the help of multiple hospitals, it’s hoped a sufficient number of test subjects can be found in a shorter period — perhaps a matter of months.

As well, it’s hoped Algernon’s approach may allow for a quicker pathway to regulatory approval, including a Breakthrough Therapy designation from the U.S. Food and Drug Administration.

Moreau says that successful Phase 1 trials in 2021 could lead to Phase 2 testing as early as 2022.

And he believes Algernon is well-placed for investors looking to gain value, noting that although the company has a $45-million market capitalization, a successful Phase 2 trial could increase that dramatically.

DMT isn’t the only promising prospect on Algernon’s roster of repurposed drugs.

The company has also been testing the drug Ifenprodil for applications in the treatment of lung diseases in a Phase 2 trial in Australia. But when the pandemic hit last March, there was some indication that the drug might be able to reduce the severity of COVID-19 infections, so Algernon was approved for a multinational trial, with data expected by the end of this month.

With two drugs addressing two major global health concerns in the clinical trials pipeline, Moreau is optimistic about the health of both the company he leads and the patients who may be helped by its products.

For more information on Algernon Pharmaceuticals, visit their website here.