How Gold Line and EMX have found a gold miner’s dream in Sweden - BNN Bloomberg
{{ currentBoardShortName }}
Markets
As of: {{timeStamp.date}}
{{timeStamp.time}} 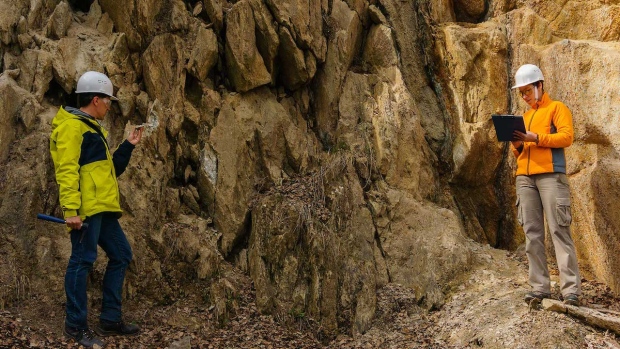 The price of commodities falls during uncertain times, such as the COVID-19 pandemic that we find ourselves in the midst of. Among those in the resource business, gold has a reputation of being countercyclical. Even under the extraordinary circumstances of COVID-19, gold is proving this to be true. While metals intended for industrial usage suffer due to slowed or closed businesses, gold thrives in times when investors are saving up and want a stable platform to preserve wealth.

It’s not all easy in the gold market, though — the value might be going up, but actually getting to the gold may be difficult in many countries due to worldwide lockdown slowing exploration in many areas.

But what if there was a company that already had everything in place to secure safe and steady gold production? In the midst of an uncertain market, Vancouver-based Gold Line Resources (TSXV: GLDL) is busy proving that from crisis can come opportunity.

Gold Line’s unique position comes from its partnership with exploration company EMX Royalty. A skilled exploration company can help mitigate the current uncertainty by honing in where there is maximum value and minimum risk — and EMX has been working on setting up a truly exciting project in Northern Europe long before we heard about the virus.

“We got a district-scale play surrounded by operating mines in a first world country. You would never find that in North America.”

The result of their careful planning and eye for opportunity has been a truly fantastic opportunity in Sweden, known as the District Scale Gold Project. EMX had always been interested in Northern Europe, a place with over a millennium of mining history behind it.

The company had been operating in the area for nearly a decade when in 2015 they noticed an interesting trend happening along a 200 km greenstone belt known as the Gold Line, based on its many gold deposits. In 2015, gold prices were slumping, and small local Swedish companies were letting their licenses expire.

Adam Cegielski, CEO of Gold Line notes, “We got a district-scale play surrounded by operating mines in a first world country. You would never find that in North America.”

In Sweden there is a grace period of about a year on licenses, so EMX realized that right in the middle of many highly successful gold mines could suddenly be many more accessible sites. In early 2017, the company was waiting to strike as soon as midnight rolled around on the licenses expiring.

Though other companies started to realize what was happening, EMX had moved first and, as a result, ended up with the rights to projects located right in the middle of a gold belt that included some of the most successful sites in all of Europe.

EMX’s expertise isn’t limited to Scandinavia, however, and the company (originally Eurasian) has nearly 160 projects located around the world, coupled with a network to match. EMX looks out for great opportunities such as with the Gold Line, and then seeks a funder — and so far, this has been a wildly successful model as EXM has $68 million cash on hand.

For this new project, EMX approached an old partner in Scandinavia, PI Financial, and they began to look for the best people they knew in mining financing. Some canny networking later, and a new company was created, named Gold Line after the Swedish site. Gold Line and EMX have high stakes in each other’s success. Having an exploration partner with a track record like EMX is fantastic. Having an exploration partner who has the initiative to see an opportunity and nab locations in the heart of one of Northern Europe’s biggest gold producing areas? Beyond fantastic.

EMX’s move at District Scale wasn’t made just because of the deposits, though. All the gold in the world is worthless if you can’t access it. Thankfully, Sweden is one of the most appealing jurisdictions in the world today, combining high untapped potential with all the amenities of a highly developed country. While Sweden is historically known for its gold resources, it has been relatively unlooked at by modern, systematic exploration.

Foreign mining companies didn’t have a role until the 90’s — previously, most companies were content to simply find the easiest areas to work under the old state-sponsored monopoly. EMX, however, has been able to bring the most cutting edge in global exploration techniques to this playing field and is ready to go deep.

A portfolio worthy of investor attention

Gold Line’s portfolio includes the Storjuktan North project, which has a 22,336-hectare license package located at the northern end of the Gold Line Mineral Belt-Licenses strewn with high-grade arsenopyrite-bearing boulders and outcrops of mineralized intrusive rocks.

They’ve also got Storjuktan South under their belt, which has seen surface sampling geochemistry and drilling of approximately 4,500 m over 37 drill holds with a number of high-grade intercepts.

The Blåbärliden project has a 3,806-hectare license package located along the trend of rock units that host the Barsele Deposit. The project also has historic, high-grade boulders (>10 g/t Au) from unknown sources that illustrate the potential for additional high-grade gold mineralization.

Rounding out Gold Line’s package are the Paubäcken project — consisting of a 16,724-hectare license package — and the Kankberg Norra project — an 830-hectare license located in the mineral-rich Boliden area of the Skelleftea belt in Northern Sweden.

A stable and world-class jurisdiction

Beyond the gold itself, Sweden is an exciting country to work in for mining companies. It is a stable first world nation with a friendly government that supports foreign investment. Here, permitting processes are simple and straightforward. Sweden also has extremely favourable corporate tax rates, as well as very low regional tax rates, with little in the way of burdensome state royalties.

“The best place to find gold is where it has been found before,” notes Henrik Lundin, Chairman of Gold Line.

Eric Jensen, Director at Gold Line, adds, “Sweden is among the best for tax rates with no state royalties. Personal tax rates are high but corporate rates are quite low.”

Energy costs are often one of the major drains on cash for any mining endeavour, but these are very competitive in Sweden. Easy access to cost-effective, clean hydroelectric power could even make the project not just more affordable, but significantly greener as well.

There is excellent development in the area and a wealth of existing mining knowledge — an office of the Swedish Geological Survey is located nearby, with many core samples and pieces of historical data readily available.

The project in question has particularly excellent infrastructure due to being in the middle of a long-developed region, with no difficulty in getting truck or plane transportation to the area. Even the weather in the area can be useful to the logistics. Wetland areas that would normally be difficult to mine can be accessed during freezing winters; the ice able to hold up all the equipment needed.

What can investors expect from Gold Line and EMX in the near future? There are already significant targets that are going to be immediately drilled, with $6.5million in cash being allocated for aggressive exploration of the most promising and obvious high-grade targets.

Gold Line is also looking to further bolster its stellar management team, with investors being told to watch out for results from their ongoing exploration. EMX has served up a list of great targets and Gold Line is getting right into a strategy of aggressive investigation of those targets.

While there might be plenty of uncertainty going around in the world right now, the price of gold looks to be a sure thing, and Gold Line has put everything in place to capitalize on the opening that they and EMX have spotted.