How this company is giving hope for challenging neurological treatments - BNN Bloomberg
{{ currentBoardShortName }}
Markets
As of: {{timeStamp.date}}
{{timeStamp.time}} 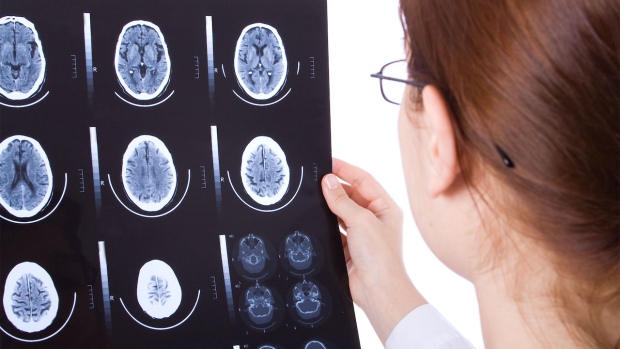 Looking at slides of the blood-brain-barrier. , Image courtesy of Market One Media

Twelve per cent of the world's deaths are caused by neurological disorders. This statistic from the World Health Organization comes as DALYs (Disability-Adjusted Life Years) continue to increase across the board.

While there are a variety of reasons why neurological treatment is complex, one of the chief causes is that most drugs are not developed to sufficiently deliver their benefits directly to the brain.

"We're going after a solution where currently none exists right now."

Despite the amount we still don't know about the human brain, we do know that it is immaculately protected. While the cranium, membranes and layers of tissue keep the brain well insulated from physical damage, it's the blood-brain barrier (BBB) that can prevent neurological treatments from working as well as they should.

As the BBB is a highly selective semipermeable border of cells, it can prevent any perceived risk of infection from entering into the brain. While it's an outstanding way of keeping any threats out of the central nervous system, it works the same way with medicine.

This ongoing challenge is a significant factor in DALYs increasing for anyone suffering from diseases such as Parkinson's, ALS, Alzheimer's, and Hunter and Hurler syndromes. Therefore, no matter how small, any steps towards permeating this natural defense mechanism could drastically reduce DALY numbers and allow patients suffering from neurological disorders a renewed life expectancy and greater quality of life.

With a versatile platform, Bioasis Technologies is set make a significant impact in the hunt for new treatments

The company’s versatile drug delivery platform enables the delivery of medicines, including biologics and gene therapies into the brain in a non-invasive way.

Referred to as the xB3 platform, this technology works to deliver therapeutics across the blood-brain barrier enabling the treatment of central nervous system (CNS) disorders in areas of high unmet medical need, including brain cancers and neurodegenerative diseases.

For reference, xB3 is a small 12 amino-acid peptide that works with a wide variety of therapeutic payload types which do not normally enter the brain, including antibodies, enzymes, small interfering RNA (siRNA) and certain small molecules.

This breakthrough has allowed the company to more closely test treatments that wouldn't have been an option before.

Despite the level of difficulty involved, early steps indicate the potential for a significant shift.

So far, in a range of preclinical studies, the xB3 peptide has been shown to help ther­apeutics effectively penetrate the BBB and reach target areas within the brain.

The company’s studies have also found that intravenous administration can provide a relatively non-invasive route for efficacious delivery of xB3-modified therapeutics.

In one of their examples, preclinical disease models showed that intravenous treatment of HER2+ breast cancer-related brain metas­tases with an xB3 version of Herceptin (xB3-001) led to a 68 per cent reduction in the number of brain metastases.

xB3-001, which Dr. Rathjen says “Is designed to be better than Herceptin.” Herceptin is one of the leading treatments for HER2+ breast cancer and “Preclinical studies have demonstrated that xB3-001 can control cancer outside of the brain, but it can also move into the brain and control any tumours there, which Herceptin cannot do.”

Another challenge has been the non-invasive delivery of genetic therapies such as siRNA into the brain. A recent publication by Bioasis scientists has demonstrated the translocation of xB3 across the intact blood brain barrier whilst carrying an siRNA with the end result being reduced effects of ischemic stroke. This work has been a driver behind the recent collaboration with Israeli company Aposense.

The implications of this discovery are wide ranging, and this platform may provide a general method to intervene in diseases of the brain using gene therapy approaches.
One of the advantages of the xB3 platform is that it can transport medicine into the brain without disturbing the BBB because it utilizes one of the body’s natural mechanisms, in a receptor-mediated process called transcytosis, of drug delivery across the BBB.

In addition to the company’s potential applications of XB3-001 in breast and gastric cancers, Bioasis's other pipeline programs continue to explore the enormous unmet need for effective treatment in other diseases settings such as Parkinson’s disease, Lewy Body and other forms of dementia, including Alzheimer’s disease.

In June 2020, the company entered into a significant licensing transaction with Chiesi Group, a pharmaceutical company that focuses on rare genetic diseases and diseases where lysosomes aren't functioning correctly.

As Dr. Rathjen puts it, "Lysosomes are basically the body's garbage men. They're structures inside cells that break things down into smaller pieces so they can be excreted harmlessly.”

“If they don't work as intended, proteins will aggregate and collect inside cells and become highly toxic. It's this type of malfunction that can play a role in neurodegenerative disorders like Parkinson's.”

This strategic alliance provides Chiesi Group with a worldwide, exclusive license to use Bioasis's xB3 platform for delivery of undisclosed enzymes for treatment of four lysosomal storage disorders (LSDs).

Giacomo Chiesi, Head of Chiesi Global Rare Diseases, a business unit of Chiesi Group also noted at the time the deal was signed that “The unique delivery method of [Bioasis’s] xB3 platform has the potential to overcome a significant challenge in the treatment of many neurological disorders, which is the ability to cross the blood-brain barrier.”

Moreover, under terms of the agreement, Bioasis has received an upfront payment of USD$3 million and may receive additional potential milestone payments of up to USD$138 million and royalties on net sales from licensed products.

In addition to their strategic alliance with Chiesi Group, Bioasis has also has a deal with Prothena, in the neurodegeneration field. It's another transaction that has secured funding for development programs, with potential milestone payments, as well as a potential royalty on net sales.

On March 31, the company also announced that it had formed a research collaboration with Aposense Limited, a highly innovative Israeli bio-pharmaceutical company, specializing in the development of novel drugs utilizing membrane electrical forces. The Scientific President of Aposense is Professor Roger Kornberg. Professor Kornberg is a renowned biochemist and in 2006, he was awarded the Nobel Prize in Chemistry in recognition for his studies of the molecular basis of eukaryotic transcription, the process by which DNA is copied to RNA.

The research collaboration will focus on the delivery of siRNA into the brain.

Dr. Rathjen notes, “With the recent publication of data demonstrating efficacy associated with xB3-siRNA knock-down of the NOX4 gene in a model of stroke, we are pleased to have formed this collaboration with Aposense and we look forward to progressing the discovery and development of new siRNA-based drugs incorporating our xB3 platform, enabling the treatment of serious neurological conditions.”

These opportunities for Bioasis to synergize its platforms with other groups' technology gives the company an edge in creating new products, beyond enzymes and antibodies to gene therapies such as siRNA that have the potential to show great therapeutic benefit to patients because they are able to enter into the brain.

From an investor's perspective, it's an attractive structure for momentum.

More than 98% of small-molecule therapeutic drugs cannot make it past the robust blood-brain barrier, which serves the...

Development programs are fully funded via partnered companies, while Bioasis gains further insights from each transaction's tech resources. It's this model that continues to propel research and testing as Bioasis explores new treatment applications.

With promising results already showing, and new results coming soon, it's not hard to see that Bioasis will be instrumental in what could be the next big breakthrough in neurological treatment.

If results are positive, then millions of people will get the chance to live healthy and hopeful lives.

That reward is enough incentive to give Dr. Rathjen and the Bioasis team motivation to explore every avenue they can.

"The work we do is important. Because of the widespread effects of neurological disease, we have the chance to help countless people into the future.”

Learn more about Bioasis Technologies by visiting their website here.

Make sure to follow Bioasis on social media for the latest news: