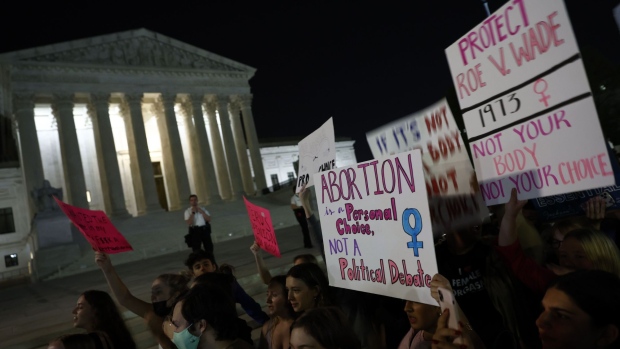 Demonstrators outside the U.S. Supreme Court in Washington, D.C., U.S., on Monday, May 2, 2022. The U.S. Supreme Court is poised to overturn the landmark Roe v. Wade decision protecting the constitutional right to abortion, according to a draft majority opinion circulated inside the court, Politico reporter. , Bloomberg

(Bloomberg) -- The bombshell leak of a Supreme Court draft ruling overturning the right to abortion has put the issue to the forefront of the coming U.S. election battle, and will likely reverberate around boardrooms across the nation as well.

The decision, reported by Politico, would see the half-century-old Roe v. Wade ruling axed, allowing individual states to decide on their own abortion restrictions. When Texas last year banned procedures after the six-week mark, some companies in the state condemned the move, arguing that it would deter top talent, and offering assistance to workers seeking abortions.

According to the Guttmacher Institute, which researches sexual and reproductive health and rights globally, 26 states are “certain or likely” to ban abortion if Roe v. Wade is overturned, which will force many people across the country to travel lengthy distances for treatment.

That may put further pressure on companies to find ways for their employees to receive the reproductive care services they’ve been entitled to for half a century.

Here’s how some of the nation’s biggest corporates are currently helping workers:

The New-York-based bank, which is headed by its first female chief executive officer, Jane Fraser, and has some 8,500 employees in Texas alone, pledged to cover travel costs for employees seeking abortions. A source said the costs covered could include airfares and lodging if necessary.

The Dallas-based parent company of dating apps including Tinder and OkCupid, set up a fund to support staff after Texas’s near-total abortion ban came into effect in late 2021. Chief Executive Officer Shar Dubey described the ban as “so regressive to the cause of women’s rights that I felt compelled to speak publicly about my personal views.” The fund aims to cover the costs for employees and dependents who need to seek care outside of Texas. Rival dating app Bumble has set up a similar fund.

With more than 4,000 workers in the U.S., Yelp will next month roll out a new travel benefit which “allows our U.S. employees and their dependents to have equitable access to reproductive care, regardless of where they live.” A person familiar with the matter said the benefit, announced before the draft ruling was leaked, would be offered through the company’s insurance provider.

Describing the Texas abortion law as an “attack on women’s access to health care,” Lyft Inc. Chief Executive Officer Logan Green said last week that the ride-hailing company is working with health providers to cover the cost of rides for women in Texas and Oklahoma—which outlawed abortion last month—who seek out of state care. Both Lyft and Uber have also pledged to pay legal fees for any of their drivers sued under anti-abortion laws for helping women seek out the procedure.

Chief Executive Officer Marc Benioff told employees in September that the company would help any employees living in Texas to relocate out of the state if they wished to move in response to strict abortion laws.

The jeans-maker said any employee who opts into their health-care plans will be eligible for reimbursement of travel costs for abortions, including part-time workers.

The company has said it will cover the cost of abortions and travel for treatment for its retail workers.

The web hosting company last year gave the group Texas Right to Life 24 hours to find a new provider, after the anti-abortion rights group set up a website encouraging people to send anonymous tips about alleged violations of the state’s laws. GoDaddy said the group had breached the terms of service.