Global Chip Shortage May Last Through Into 2022: Bain & Co.

HP Inc. and Dell Technologies Inc., two of the biggest personal-computer makers, posted earnings reports that raised alarm about the impact of a persistent component shortage, even as demand for their products remains strong.

HP executives said they couldn’t meet all the PC orders they received in the July quarter, and expect production to be hurt by a dearth of some types of chips, shipping disruptions and the shutdown of some factories in Asia. Dell reported strong sales and profit that topped estimates in the period, and gave a bullish forecast -- but its upbeat report was overshadowed by concerns raised by rival HP. 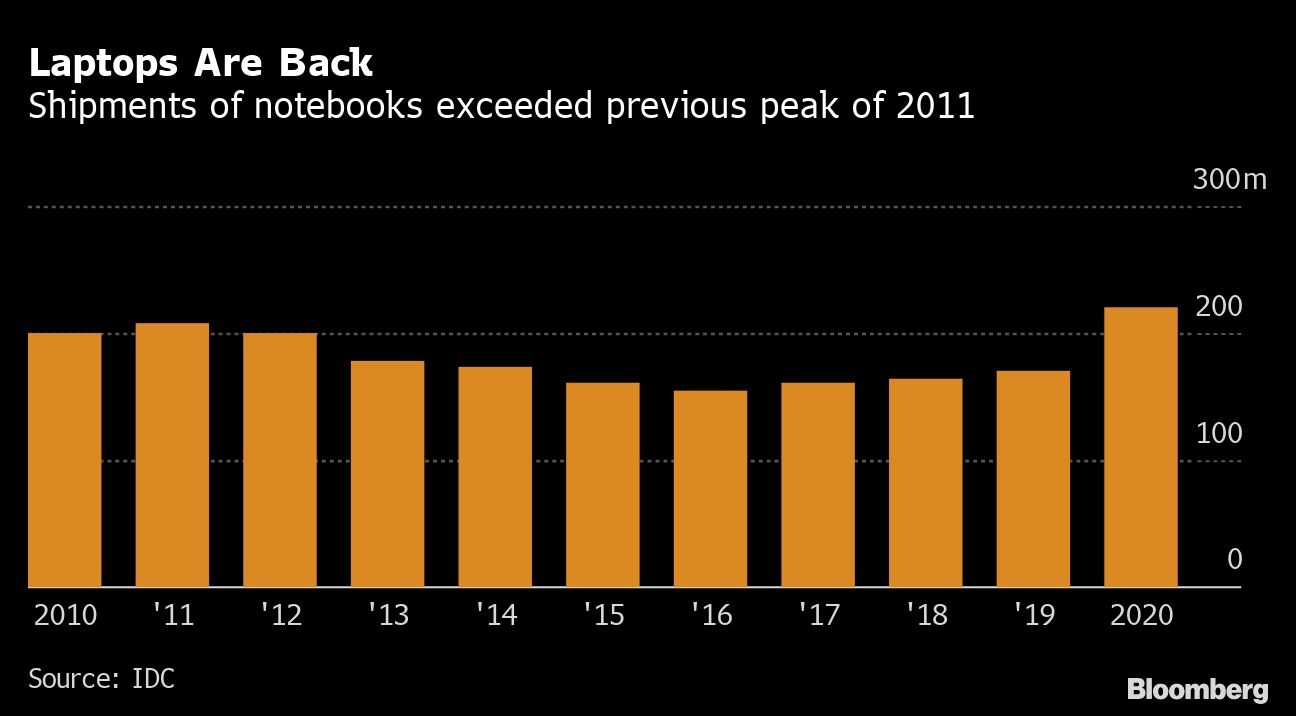 Shares of both companies declined Friday, following their quarterly earnings announcements late Thursday. HP’s stock was down about 3.5 per cent as the market opened in New York while Dell slid 4.9 per cent.

“We could have grown more if it wasn’t for the shortages of components,” HP Chief Executive Officer Enrique Lores said in an interview. He expects demand will continue to be strong, but said HP will be limited by the lack of parts for several more quarters. Third-quarter revenue fell short of projections, while profit topped estimates and is forecast to keep growing as the company raises PC prices.

On its conference call, Dell executives said the company was also struggling to get all the chips it needs. The PC maker said demand remains robust, even as it also boosts prices, and it forecast revenue this quarter will expand at a percentage in the mid-single digits, compared with the previous quarter.

Dell said it’s using its size to try to get guaranteed supply, but it expects the shortages to continue. The company cited microcontrollers, power management chips and display drivers as examples of parts that have been difficult to obtain.

“It’s a challenging environment,” Dell Chief Financial Officer Tom Sweet said in an interview. “The team has done a good job of working with long-term suppliers.”

Almost half of Dell’s sales come from customers visiting its website. That allows the company to direct them to products it has parts for.

Though both companies struggled to fill orders, HP had a greater challenge doing so than its Round Rock, Texas-based competitor. Revenue from HP’s Personal Systems unit, mostly computers, fell about 1 per cent to US$10.4 billion in the period ended July 31.

At Dell, revenue from PCs rose 27 per cent from a year earlier to US$14.3 billion. Sales to consumers were up 17 per cent, a deceleration from the 42 per cent expansion reported in the prior period. PC sales to business and government agencies were up 32 per cent to US$10.6 billion.

Lores said HP needs to do a better job of managing supplies and ordering. It’s going directly to component suppliers to cut deals  -- something it had previously left to contract manufacturers -- shifting to software to better manage business and adjusting its designs so that chips can be used across multiple hardware models, he said.

“There are some areas where we need to improve operationally,” he told analysts on a conference call.

Lores stressed that the company has been constrained by a shortage of cheaper, more basic chips, such as those that control Wi-Fi connections. Microprocessors made by Intel Corp. and Advanced Micro Devices Inc. are sufficient, he said. The problem with the parts that are in short supply is that they’re made in factories that produce multiple types of chips, putting the PC industry in competition with many other industries that rely on semiconductors for capacity, he said.

HP’s total revenue in the July quarter rose 7 per cent to US$15.3 billion. Profit excluding some items in the recent period rose to US$1 a share. Analysts projected 84 cents. Net income was US$1.1 billion, or 92 cents a share.

At Dell, overall fiscal second-quarter sales rose 15 per cent to US$26.1 billion. That compares with analysts’ average estimate of US$25.6 billion, according to data compiled by Bloomberg. Profit, excluding some items, was US$2.24 a share. Analysts projected US$2.03. Net income in the period, which ended July 30, fell to US$880 million, or US$1.05 per share.