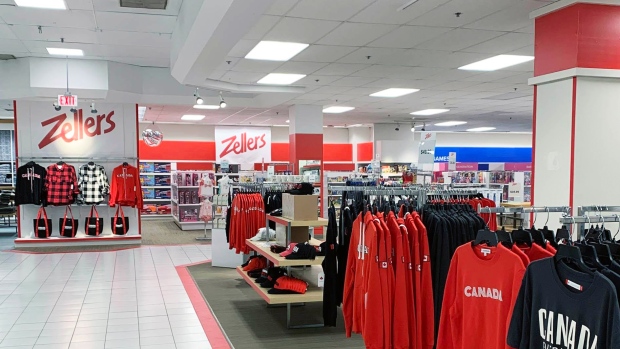 A Zellers pop-up store inside the Hudson’s Bay store at the Burlington Centre in Burlington,Ont. is shown in a July, 2021 handout photo. , THE CANADIAN PRESS/HO-Hudson's Bay Co.

Members of a Quebec family behind the recent trademark applications for companies bearing the name Zellers are the focus of a lawsuit by Hudson's Bay Co. ULC, which owns the defunct retail brand.

In a statement of claim filed in Federal Court, the company accuses members of the Moniz family of trademark infringement, depreciation of goodwill and so-called passing off - the deceptive marketing or misrepresentation of goods.

“The personal defendants' intention was to either confuse Canadians or recover a payment from HBC,'' the statement of claim filed Oct. 5 said.

The Zellers brand is being used to intentionally “mislead Canadian consumers'' and “trade on the valuable goodwill owned by HBC,'' the retailer said in court documents.

The defendants could not be reached for comment and a response to the claim has not yet been filed in court.

HBC claims the defendants acted in bad faith and are “not authorized to use Zellers trade names or trademarks.''

“The corporate defendants' good opportunistic and flagrant adopting and use of Zellers-formative trade names and trademarks is deliberate and outrageous,'' the statement of claim said.

Meanwhile, the sole director listed for Zellers Canada Inc. - Maria Almerinda Moniz Sousa - is also listed as the sole director for Kmart Canada Ltd. The two corporate names were registered within about a month of each other in May and June 2020.

The statement of claim said Zellers Inc. has a location in the city of Sorel-Tracy, about 80 kilometres from Montreal, and that members of the public are being told that a Zellers/Kmart store will open in the future. The claim added that a second location in Sorel-Tracy has signs indicating that the building is under the management of Zellers Canada Inc.

HBC alleges that the defendants have refused to comply with the company's demands to cease and desist.

The store hit its peak of about 350 locations in the late 1990s before losing ground to big box competitors such as Walmart. In 2011, HBC announced plans to sell the majority of its remaining Zellers leases to Target Corp.

The retailer closed the last of its stand-alone brick-and-mortar Zellers stores in 2020, but continued to have plans for the brand and did not abandon the Zellers trademarks and logos, according to court documents.

HBC spokeswoman Tiffany Bourre said the pop-up Zellers store was intended to “delight our customers with a fun and nostalgic experience with one of HBC's most beloved brands.''

The company is planning a second pop-up Zellers shop at its department store in Anjou, Que., she said.

Bourre added that the company filed the claim to protect its Zellers brand and avoid consumer confusion.

“The allegations in the claim relate to planned unauthorized third-party Zellers stores, among other unauthorized uses of the Zellers brand,'' she said in an email. “HBC intends to pursue this claim vigorously.''