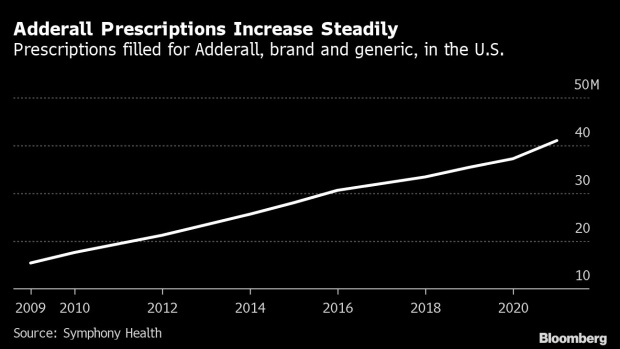 (Bloomberg) -- Nearly two-thirds of community pharmacies had trouble ordering the popular attention-deficit/hyperactivity disorder drug Adderall at the end of July and beginning of August, at a time when demand is at all-time highs.

The National Community Pharmacists Association surveyed store owners and managers about their experiences purchasing brand and generic Adderall between July 25 and Aug. 5. Of the 358 who responded, 64% said that the medicines were on backorder, the group said.

Teva Pharmaceutical Industries Ltd., the biggest seller of Adderall in the US, said at the end of July it had been experiencing “supply disruptions” of the drug. The company has said it expects the situation to be fixed within the coming weeks.

Use of the ADHD therapy continues to climb each year, driven by increased diagnoses. Prescriptions rose to 41 million last year, according to Symphony Health, up 10% from a year earlier.

The prescription stimulant improves an ADHD sufferer’s ability to focus but also has the potential to be abused. The growth of telehealth businesses dedicated to helping people secure ADHD diagnoses and treatments is likely behind some of the spiking demand for the drug.

Some of these companies have recently been accused of making Adderall too widely available, and several major pharmacies have stopped filling prescriptions of this drug from these startups as a result.

The US Food and Drug Administration isn’t reporting an overall shortage of Adderall. While the agency is aware of Teva’s delays, “the demand is being met for the overall market,” FDA spokesperson Cherie Duvall-Jones said.

Adderall has been in short supply before. The FDA reported a shortage from September 2019 through May 2022, for example.

Andie Pivarunas, a spokesperson for the pharmacy association, said that media coverage of Adderall supply issues by Bloomberg News and other outlets prompted the association to gather this data.