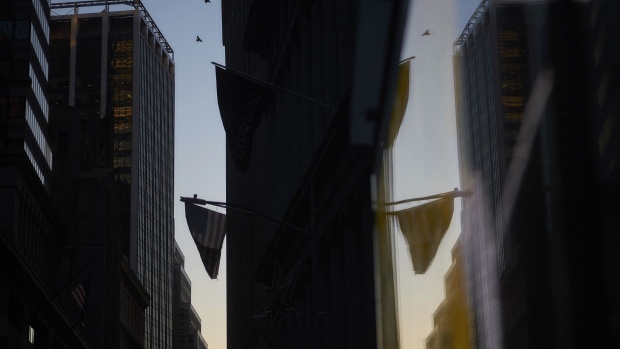 An American flag is reflected in the window of a building near the New York Stock Exchange (NYSE) in New York, U.S., on Thursday, Dec. 27, 2018. Volatility returned to U.S. markets, with stocks tumbling back toward a bear market after the biggest rally in nearly a decade evaporates. , Bloomberg

The US$4.4 trillion market for U.S. exchange-traded funds is slowing down.

Asset managers set up fewer ETFs in 2019 than in any other year since 2014, data compiled by Bloomberg show. Some 225 funds traded for the first time during the past 12 months, down for a second-straight year. At the same time, fund closures spiked 35 per cent.

It’s a sign that a golden age for ETF issuance that’s fostered more than 2,000 products may be losing some of its luster. As management fees trend toward zero, fund issuers must look to uncharted areas for opportunities to woo assets and break out in a space where increasingly only the largest thrive.

“It’s ‘The Hunger Games’ out there,” said Ed Lopez, head of ETF product at Van Eck Associates Corp., referring to the dystopian survival competition that inspired several movies. “There’s just a ton of ETFs,” he said, adding “it’s harder and harder to be successful and to sustain an ETF through the early parts of its cycle.”

For years, asset managers took advantage of the mania surrounding the fast-growing ETF industry to pump out new products. Investors now have access to everything from real estate and gold, to convertible debt and Chinese equities, all through the ETF structure.

Yet with the number of offerings ballooning, issuers have become more prudent -- not least because they’ve been forced to do more with less and lower their fees to compete. Social Finance Inc. made waves in February with plans for the first funds that cost nothing, while Salt Financial even paid investors to buy its fund.

“Compared to many other instruments that investors are invested in, the reality is the ETF industry is extremely competitive,” Armando Senra, BlackRock Inc.’s head of iShares for the Americas, said at a conference this month.

So, many of the funds that did come to market this year targeted hot or niche industries, such as video gaming, cyber security and marijuana. Several debuts also focused on companies with better environmental, social and governance characteristics, boosting ESG ETF assets by 150 per cent.

But amid the success stories, more than 100 funds shuttered. Some tracked single countries -- such as Poland and Germany -- while others offered broader international exposure.

More closures are already in the offing for 2020: Invesco Ltd. has said it will soon shut down 16% of its U.S. ETFs, including 14 of 20 strategies that it acquired when it bought OppenheimerFunds Inc. in May.

Many issuers are now working on gathering assets in existing products rather than launching new ones, according to Deborah Fuhr, founder of ETFGI, a London-based research firm. “It’s about economies of scale, growing distribution and rationalizing,” she said in a phone interview.

That rings true at VanEck, which is taking a more deliberative approach, and either improving on existing asset classes or tapping new areas of the market, Lopez said.

Still, more equity ETFs could start trading in the first half of 2020, according to CFRA Research. An ETF-focused regulatory regime that takes effect this month will cut roadblocks for new issuers, while the approval of actively managed ETFs that disclosure their holdings less frequently could also spur issuance.

“Asset managers could have held off on launching new products until they had more clarity,” said Todd Rosenbluth, CFRA’s director of ETF research. The so-called ETF rule “should make it easier and cheaper” to create ETFs, he said, and with several active managers poised to deploy the new non-transparent structure, “there will be a wider range of firms launching products.”