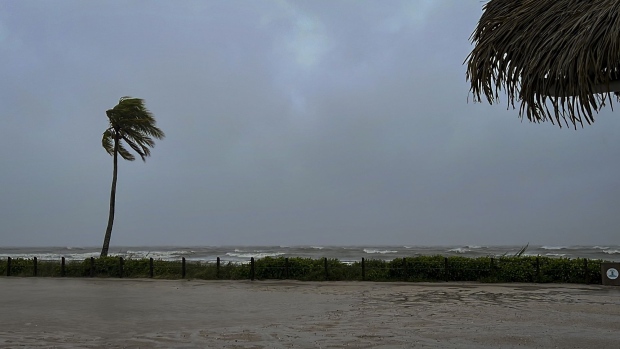 Fort Myers Beach ahead of Hurricane Ian in Fort Myers, Florida, US, on Wednesday, Sept. 28, 2022. Hurricane Ian rapidly gained strength -- with winds reaching 155 miles an hour -- as it barreled toward the coast of Florida, threatening to rip roofs off of homes, wreck agricultural crops and cripple infrastructure as one of the costliest storms to ever hit the US. , Bloomberg

(Bloomberg) -- Hurricane Ian will test a Florida law that requires generators to provide four days of power at assisted-living communities and nursing homes, a measure that was passed in the aftermath of the deadly Hurricane Irma in 2017.

The law, which went into effect in 2019, requires large facilities to have generators that could provide 96 hours of power. It came in response to the dozen deaths at one facility after Irma knocked out electricity, causing residents to overheat.Virtually all Florida nursing homes and assisted-living facilities had working backup generators as of the date of their last inspection, according to the state’s Agency for Health Care Administration, which licenses them.

Such backup plans are crucial in the effort to keep older Floridians safe. Some 4.6 million people age 65 and older live in Florida, according to the US Census Bureau, making it second only to Maine in the share of seniors as a percentage of state population. That number is particularly concerning, given the logistics of evacuating seniors who may have limited mobility, or having enough supplies for those who have to shelter in place.“We are all waiting to see how the storm will affect power outages,” said Kristen Knapp, a spokesperson for the Florida Health Care Association, a trade group that represents most of the state’s nursing homes. “Once the storm moves through, the concern is the power and getting the power restored.”

Hurricane Ian barreled ashore in southwest Florida on Wednesday with a massive and deadly surge of water and catastrophic winds. Ian has since been downgraded to a tropical storm with winds of 65 miles (104 km) per hour as it swept northeast into central Florida, leaving 2.5 million homes and businesses without power amid downed trees and inundated roadways from one of the costliest and most powerful hurricanes in US history. Temperatures are expected to reach 85F (29C) with more than 60% humidity this weekend in Tampa.

“The impacts of this storm are historic,” Florida Governor Ron DeSantis said in a Thursday briefing “We’ve never seen a flood event like this. We’ve never seen a storm surge of this magnitude.” Read more on the latest news on Hurricane Ian

The state’s care facilities — about 700 nursing homes and 3,470 assisted-living facilities — have been preparing for the storm for days. As of Wednesday morning, at least 35 facilities housing 3,000 residents had evacuated, mostly in low-lying areas like Collier and Sarasota counties, according to Knapp. In the last week, FHCA’s members have been performing fuel checks for generators, restocking supplies and hardening building exteriors.Facilities, which are at 81% occupancy on average around the state, have transfer agreements in place for their residents. Groups may sometimes have to be split up among several other locations.

The largest union of health care workers in the state, 1199SEIU United Healthcare Workers East,  said a staffing shortage will make caring for patients “more difficult and dangerous” during this storm. “Our dedicated nursing home caregivers are doing all they can to keep their elderly patients safe in evacuations or if they shelter in place during Hurricane Ian,” Margarette Nerette, vice president of long-term-care for the union said in a statement late Wednesday.Older Floridians may also live in mobile homes, which are treacherous in storms, said Will Hill, the assistant director of the Rider Center at Florida A&M University and Florida State University. Wealthier retirees who live in beachfront property may also face difficulties.“When you think about moving to sunny Florida, it sounds great ‘cause you don't have to deal with the winter all the, the downsides of that,” said Hill. “But the flip side is all these other complications.”