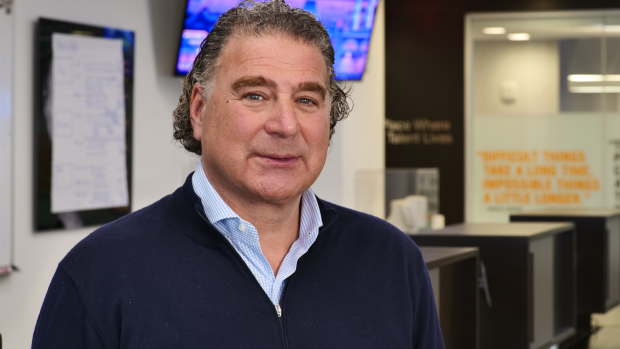 Depending on how the next few years go, the 63-year-old executive might have a hard time staying well-coiffed if deal activity in the fast-paced cannabis sector continues to heat up. Simon – who in previous roles sold everything from diet drinks to free-range organic chicken - now has one goal ahead of him: running the biggest pot company in the world.

And as he looks forward to capturing a bigger slice of the global cannabis pie, his business acumen, developed over decades in various marketing and management roles, will be put to the test as rivals in the U.S. are already generating oodles of cash in a market where the more established Canadian players remain on the outside looking in.

Before pot, there was ice cream and beer

Business, as it turns out, has always been in Simon's blood. His formative years were spent in Glace Bay, N.S., where his father ran Simon's Dairy, a small grocery store along the Cape Breton coal mining town’s main thoroughfare on Union St. Along with his four siblings, Simon helped stock shelves and deal with customers, while earning an early education in business by watching his father Norman.

At 17, Simon left Glace Bay for the big city - Halifax - where he majored in sociology at Saint Mary's University and, as a Residence Don, picked up a few extra bucks selling Moosehead beers to students that he received for free from the brewery.

After riding out the decade at Häagen-Dazs, Simon decided to take a chance working for Slim-Fast, the weight-loss drink that rode the fitness wave of the late 1980s and 1990s. Simon was fired two years later; but upon reflecting on his time at Slim-Fast, stated the company's lack of consumer focus ran contrary to what he learned selling Häagen-Dazs products.

“It was built into a billion-dollar-plus business, but it didn't have processes, it didn't have strategic planning or a connection to the consumer. They would put the brand on toilet paper if it made sense," he said.

Being unemployed and a Canadian, Simon needed a job to stay in the U.S. He used US$200,000 in personal savings to buy several food brands - including a kosher frozen foods company called Kineret - and took the company public in 1993 with a scant US$3.5-million valuation.

With some hustle and luck, Simon kept acquiring organic food brands and growing his business. He renamed the company to Hain Celestial Group Inc. and secured key investments and partnerships from the likes of food-and-beverage giant H. J. Heinz Co. and Li Ka-Shing's Hutchison Whampoa Ltd. His bet - that people would happily pay a premium for healthier, more natural products - paid off with annual sales peaking at US$2.89 billion in 2016.

Throughout his career, dealmaking and consolidation became a bit of an art for Simon, who led more than 60 acquisitions, most of which happened at Hain Celestial. In addition to his haircut routine, Simon's other business superstitions include doing deals on Tuesdays and Fridays and giving a small amount to charity once they close.

"My model was to grow this business through acquisitions and by diversifying, because the biggest part of my business was rice cakes, and I knew one day people would stop eating rice cakes," Simon said.

Simon left Hain Celestial in June 2018 after 27 years at the helm following a tumultuous period of share-price declines, an investigation by the U.S. Securities and Exchange Commission (SEC) into dodgy financial reporting practices, and a proxy fight with an activist investor. The SEC investigation centred around allegations of awarding Hain Celestial distributors cash and incentives that weren't documented interally. The SEC settled its investigation in Dec. 2018 after Hain Celestial agreed to make several organizational changes while fixing how it reported certain sales practices.

Simon said despite not being aware of any sales mismanagement at the time, he still had to "own it and deal with it head on" as the SEC probed the company's internal reporting practices.

"There were some hard, hard nights and we were being attacked every which way personally, we were being attacked financially because the stock was dropping and everybody thinks you did something wrong," he said. "The best thing that ever happened to me was that there was nothing there, no penalties, no fines and no re-statement."

A call from an Aphria Inc. board member a few months after his semi-retirement later piqued his interest in getting back into the corporate world. The pot producer was facing a damaging report by short sellers who alleged Aphria overpaid for certain international licences and claimed some executives were involved in self-dealing.

After meeting with more board members at Toronto's Shangri-La Hotel in Dec. 2018, Simon agreed to become Aphria's new chair. A month later, he was appointed interim chief executive officer after co-founder Vic Neufeld announced his retirement. ​The company later said a special committee concluded those asset purchases were within an "acceptable range" but that some boardroom conflicts weren't properly disclosed.

"I remember calling my wife and telling her, 'What am I doing?" Simon said. "But I'm not a quitter. I thought there's a big opportunity here and I had to convince myself that I was up to doing it."

With Simon at the helm, he began cleaning up the company's warts - including writing down investments in the Caribbean and South America that were at the heart of the short-sellers' report - and refocused its efforts in the Canadian cannabis market, relying on word-of-mouth and consistent quality to place it among the top companies by sales in the burgeoning space.

People who have worked with Simon describe him as tough and demanding, someone who can quickly make crucial decisions and who often relies on instinct to get something done. Beena Goldenberg, who ran Hain Celestial's Canadian operations for 13 years under Simon and is currently the chief executive officer at Supreme Cannabis Co., recalls her former boss’s edict to make sure people are buying whatever you’re selling before investing further in the product.

"When I joined Supreme, a lot of the strategy was driven by operations and it wasn't consumer-centric," Goldenberg said in a phone interview. "It's that [consumer-packaged-goods] focus that I learned from Irwin which I brought to Supreme."

With the $8.2-billion merger between Aphria and Tilray now complete, Simon is looking to keep the momentum going. He's already hired Boston Consulting Group to advise on a 100-day plan, appointed new management to handle the combination of the companies' Canadian businesses, paid back bad loans, and is calling regulators and government officials to get Canada’s cannabis stores opened up as COVID-19 cases begin to fall.

The big prize, however, is the United States.

Tilray can’t enter the market yet due to restrictions imposed by the Toronto Stock Exchange and it doesn’t have as much cash as rivals like Canopy Growth Corp. and Cronos Group Inc. to easily buy a U.S. pot company once permitted. But Simon’s brand and marketing acumen could come in handy whenever the U.S. legalizes cannabis and the drug can be legally shipped across state lines.

"A lot of people envision a situation where the brand is going to be a very important driver of value for the business because that's ultimately what's going to get you really differentiated in a fast growing market,” said Graeme Kriendler, an analyst at Eight Capital, in a phone interview. “You might not necessarily have infrastructure in every state, but you'll have greater scale and reach from a brand perspective."

Back at home, Simon is frustrated at the pace of progress in the Canadian cannabis market. He wants regulators to allow pot companies to market their products more easily, sell them through their own e-commerce websites, allow CBD products to be sold in convenience stores, and let companies export their cannabis, similar to how Canadian brewers can sell their beer internationally.

"If the Canadian market doesn't change and legalization happens in the U.S., the Canadian market becomes an afterthought," he said. "What I want to do is take an industry that Canada was first to get to market and make sure we don't get left behind."