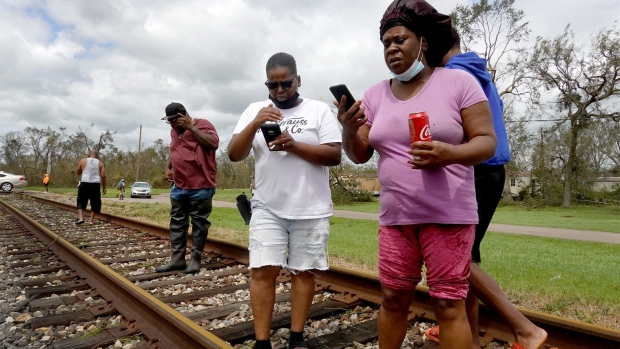 LAPLACE, LOUISIANA - AUGUST 30: Residents gather long a set of railroad tracks to try and get cell phone service after their community was heavily damaged by Hurricane Ida on August 30, 2021 in Laplace, Louisiana. Ida made landfall yesterday as a category 4 storm southwest of New Orleans. (Photo by Scott Olson/Getty Images) , Photographer: Scott Olson/Getty Images

The failure, rectified by Monday afternoon, is helping to fuel calls for Washington regulators to demand greater resiliency for mobile phone networks in the face of storms, fires and other natural disasters.

“We’re depending on voluntary cooperation” by companies to share network facilities with stricken competitors, Harold Feld, senior vice president with the policy group Public Knowledge, said in an interview. “We need to have a mandatory structure.”

Carriers rushed teams and equipment to stricken areas. AT&T said it was operating 13 mobile cell towers, while many parts of its wireline network relied on backup power. Verizon Communications Inc. said it was “deep into recovery and support efforts” with minimal service disruptions to most customers.

The FCC late Monday said Hurricane Ida knocked out more than half of cell towers in parts of Louisiana affected by the storm. The agency doesn’t specify how each company’s network is performing.

The FCC didn’t immediately reply to a request for comment.

In New Orleans, calls to 911 for help went unanswered for 13 hours, according to the policy group Free Press.

“AT&T, which local governments contracted to ensure that emergency calls reached the 911 call center over landlines, didn’t deliver,” the group said in a statement Tuesday.

Jim Greer, an AT&T spokesman, when asked about the 911 outage directed a reporter to an AT&T web post that said the company’s network in Louisiana was operating at more than 85% of normal.

The FCC needs to investigate major disruptions and develop rules to strengthen communications networks, Free Press said in its statement.

“While the new network of levees surrounding New Orleans held, the internet and phone networks in the city and surrounding parishes did not,” Vanessa Maria Graber, news voices director at Free Press, said in an email.

Outages from past storms and wildfires have raised questions about the phone network’s resiliency.

There is no requirement for cell sites to have backup power. The industry has resisted efforts to make that mandatory, arguing that would be burdensome, in part because it can be expensive to rent space for equipment and hard to get permits to store fuel in some places.

In decades past, telephones at the end of copper lines could offer service, even during widespread electricity failures, if a nearby hub managed to have power, perhaps from a generator.

After Hurricane Michael plowed across Florida’s Panhandle in 2018, the FCC in a report said phone recovery was slowed by a lack of coordination between carriers, power companies that sometimes cut restored lines, and localities.

The agency in 2016 endorsed a wireless industry pledge to promote resiliency in their networks during disasters through steps including letting calls travel on one another’s networks.