Energy markets will come back as demand for gasoline grows: Ira Epstein

The outlook for global oil markets has “improved somewhat,” with demand a little stronger than expected and supply reined in by a brutal price crash, the International Energy Agency said.

World oil production is on track for a “historic decline” this month to the lowest level in nine years, the IEA said in a monthly report. OPEC and its partners are slashing output, while others like the U.S. are forced to scale back drilling.

“It is on the supply side where market forces have demonstrated their power and shown that the pain of lower prices affects all producers,” said the Paris-based agency, which advises major economies. “We are seeing massive cuts in output from countries outside the OPEC+ agreement and faster than expected.”

It’s a stark shift in tone from last month, dubbed “Black April” by the agency’s chief, when the IEA warned that cutbacks by OPEC+ probably weren’t enough to prevent the world’s storage tanks being overwhelmed by the middle of the year. 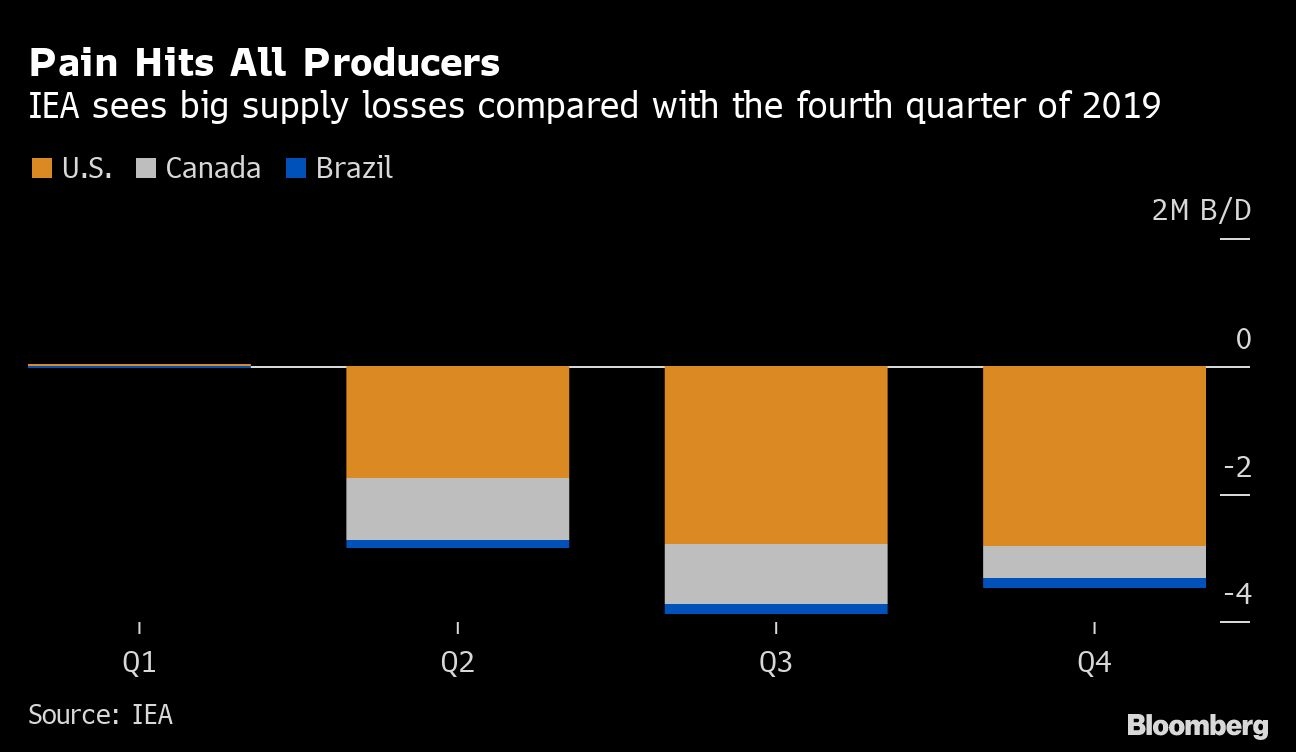 The oil market is still in a very difficult position. International crude prices have collapsed by more than 50 per cent since the start of the year as the coronavirus lockdowns ground flights, empty roads and shutter businesses. Yet the current price of about $30 a barrel in London is $10 above April’s lows.

“The picture is still very bleak for the industry,” IEA Executive Director Fatih Birol said on Twitter. “The heaviest demand destruction may be behind us, but huge uncertainties remain.”

The IEA boosted its estimates for global oil demand in the second quarter by 3.2 million barrels a day, to 79.3 million. Yet consumption remains on track for a loss of almost 20 million barrels a day in the quarter, or roughly 20 per cent, from the same period in 2019 due to the pandemic.

Global oil supplies are poised to plummet by 12 million barrels a day, or about 12 per cent, this month compared with April as an alliance of exporters led by Saudi Arabia and Russia implement deep production cuts. This week the kingdom and other Middle East producers pledged to deepen those curbs even further in June.

Their efforts are being amplified by less deliberate action among producers outside the OPEC+ coalition, such as the U.S. and Canada. They have already seen output sink 3 million barrels a day since the start of the year, the IEA said. They could lose another 1 million a day in June, it predicted.

America’s shale-oil drillers, who are more sensitive to price swings than other producers, have borne the brunt of the losses. By the end of 2020, U.S. production could be down 2.8 million barrels a day, three times the projected drop in Saudi Arabia’s output.

“Activity levels in the shale patch have dropped to record lows and nearly all operators have shut in uneconomic production,” the IEA said.

Despite its more upbeat tone on the state of global markets, the IEA acknowledged the uncertain outlook. It’s unclear whether governments can resume economic activity without causing renewed outbreaks of the pandemic, and how far the OPEC+ alliance will implement promised supply curbs.