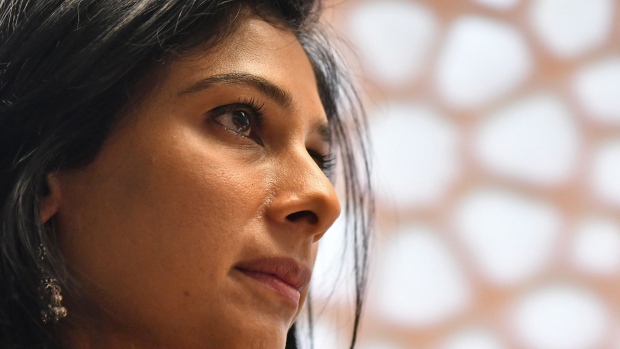 Gita Gopinath, professor of economics at Harvard University, listens during an interview in New Delhi, India on Thursday, Dec. 22, 2016. A credible view on growth is essential for the government to project revenues and spending in a nation where a million people enter the workforce each month. , Bloomberg

(Bloomberg) -- The International Monetary Fund sees “downside risks” to the global economic rebound it forecast for this year and next, and is concerned that new coronavirus variants may hinder the recovery, its chief economist said.

“Most of the overall risks are to the downside,” Gita Gopinath said in a virtual speech to an International Finance Forum conference in Guangzhou on Saturday. Gopinath, who is set to take over as the IMF’s No. 2 official in January, said the omicron strain may increase risks to the outlook and the world could also see more aggressive variants that further damage the recovery.

The Washington-based lender trimmed its outlook for global economic expansion this year to 5.9% in October, warning of a “dangerous divergence” between richer nations with more vaccine access and poorer countries without.

Gopinath urged nations to help raise inoculation rates in Africa, where many countries have fewer than 40% of their population vaccinated, by fulfilling donation pledges to the Covax global vaccine-distribution program. She also called for steps to be taken to make available another 400 million doses through swaps. She also called for countries to remove trade barriers for the export and import of vaccines.

Accelerating inflation in the U.S. and considerable uncertainties around supply and demand disruptions in the next few months could lead to “a scenario where inflation increases even further,” which could result in a negative spillover effect for many emerging economies, especially those that are exposed to foreign-currency borrowing, she said.

“It’s particularly important that major central banks communicate their policies in advance and explain their actions so that you don’t have market tantrums,” said Gopinath. “Monetary policy has to take into account the country specific conditions in reacting to it.”

Countries should tailor monetary and fiscal policies based on their own circumstances, because there are differences in underlying or core inflation from country to country, according to Gopinath.

Gopinath said inflation in goods has exceeded inflation in services in most countries, which is unusual and reflects the fact that demand has shifted toward goods from services over the pandemic.