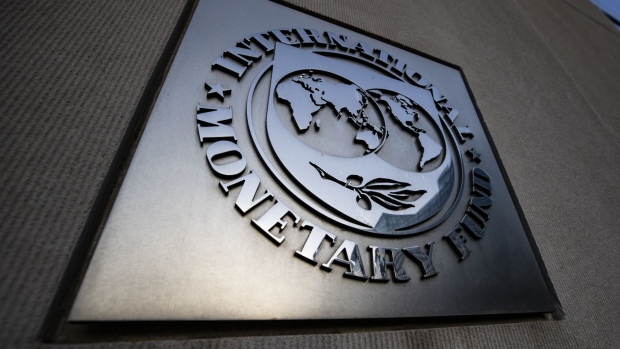 The International Monetary Fund (IMF) headquarters in Washington, D.C., U.S., on Saturday, April 3, 2021. The IMF next week will upgrade its forecast for global economic growth, driven by improved outlooks for the U.S. and China, while warning of high uncertainty and new virus strains that threaten to hold back the rebound. Photographer: Bloomberg/Bloomberg , Photographer: Bloomberg/Bloomberg

(Bloomberg) -- The International Monetary Fund began a virtual mission to Ukraine as the government seeks to resume a $5 billion loan that’s been frozen for months because its terms weren’t met.

With Covid-19 lockdowns driving the economy into a second recession since the pandemic began and infections once again soaring, the urgency to unlock the financing is growing. The Washington-based lender has sought progress on tackling corruption and safeguarding central-bank independence.

“The IMF mission, led by Ivanna Vladkova Hollar, starts its work today,” Vahram Stepanyan, the head of the IMF’s Ukrainian office, said in an emailed statement Tuesday. No date for when the review is supposed to end was given.

The government has fulfilled all the IMF’s conditions and may get a $750 million aid disbursement in November or December, according to Prime Minister Denys Shmyhal. Ukraine may also ask to extend the program, which is due to expire this year.

Last month, Ukraine received a $2.7 billion transfer from the IMF, as part the fund’s global allocation of Special Drawing Rights to ease the financial pain from the pandemic.