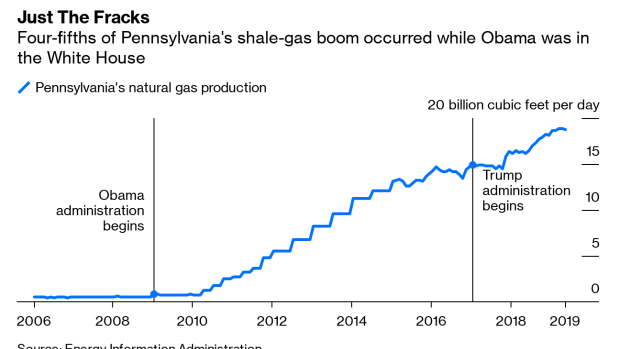 (Bloomberg Opinion) -- President Donald Trump delivered remarks on Tuesday afternoon about “American energy and manufacturing.” As you might expect, these also covered much non-contiguous ground, including Federal Reserve Chairman Jay Powell (“another beauty that I chose”), the president’s love of trucks “of all types” and a curiously extended bit about pouring cement at Central Park’s Wollman Rink – a subject “nobody wants to talk about,” apparently.

The rink riff was part of an elaborate shout-out to the Teamsters; Trump was at a new petrochemicals complex in Pennsylvania to tout his support for the local workers and fossil-fuel industry. That the message was decidedly mixed may not come as a shock, but it also says something important about the line the president is walking on energy, particularly in Pennsylvania.

For me, the most interesting part came about halfway through:

The last administration tried to shut down Pennsylvania coal and Pennsylvania fracking. If they got in, your fracking is gone; your coal is gone. You guys, I don’t know what the hell you’re going to do. You don’t want to make widgets, right? [Pointing to audience] You want to learn how to make a computer? [Mimicking making something] A little tiny piece of stuff; you put it with those big beautiful hands of yours, look … Nah, you want to make steel and you want to dig coal and that’s what you want to do.

It should be pointed out that while Pennsylvania’s coal production fell during President Barack Obama’s administration, it had been declining since at least 2001. That trend was accelerated by the arrival of cheap shale gas from states such as Pennsylvania – where, as you can see below, the Obama administration presented little obstacle. Incidentally, cheap gas from fracking is the main reason Royal Dutch Shell Plc built the plastics plant at which Trump spoke – making its final investment decision in June 2016, several months before the presidential election.

Trump’s framing is the main thing, here, though. Toward the end of his speech, he lauded Americans’ ability to “outperform anyone,” adding “no one can beat us; nothing can stop us.” Yet, mere weeks after the 50th anniversary of the Apollo 11 moon landing, he links that greatness to production of raw commodities while mocking the idea of making “widgets” or – heaven forbid – “computers.”

Let’s just get the obvious out of the way and say America is big and fortunate enough to support a range of industries, from fracking to fabrication. Private production of all goods – including agriculture, mining, construction and manufacturing – amounts to less than 18% of GDP, while private services are 70%. Setting sectors up in mutual exclusion to each other is ridiculous.

More importantly, putting one’s faith in such raw-calorific concepts as “energy dominance” sells short the human ingenuity that has underpinned breakthrough after breakthrough – including, as it happens, the fracking for which the president professes such admiration. It also glosses over real trade-offs that must be addressed, such as climate change and the fact that promoting gas production is the single-biggest rival to Trump’s beloved coal miners – partly because shale operators have increased productivity under pressure from the energy crash.

Trump was playing to a local crowd, of course, so he was bound to focus on their particular concerns and hopes. Pennsylvania is a particularly interesting arena in this regard, in part because it’s so finely balanced.

Trump won the state by a margin of less than 1%, partly by focusing on factory workers who felt ignored by his opponent Hillary Clinton, during what was a mini-recession for the sector in the year leading up to November 2016. Yet, as my colleague Justin Fox wrote here, U.S. manufacturing job gains have slowed lately, and industrial production has outright declined in the past two quarters. Trump’s tariffs, while nominally aimed at protecting domestic industry, are piling pressure on a weakening global economy. Tuesday’s surprise decision to delay tariffs on what amounted to a Christmas gift list of products suggests they’re putting pressure on American consumers too. We’re a long way from the Trump-bump to industrial stocks that greeted his election.

Besides being purple, Pennsylvania’s energy identity is also mixed. While it’s one of the country’s biggest producers of fossil fuels, it’s not in the same league as states traditionally seen as big energy producers. Less than 2% of Pennsylvania’s GDP relates to production of oil and gas, for example – much lower than in Texas or even Colorado, which went for Clinton in 2016(1). And as I wrote here ahead of last year’s midterms, Pennsylvania also looks “bluer” in terms of average income and gasoline consumption:

This makes Pennsylvania a microcosm of the political trade-offs in U.S. energy. Tariffs boost Trump’s standing with steelworkers but pressure energy demand (and raise producers’ costs). Boosting fracking, meanwhile, modestly helps the state’s economy but exacerbates the pressure on coal miners from natural gas without necessarily paying much of a political dividend on the oil side, given Pennsylvania’s relatively low average gasoline burden. On the other hand, those relying on fuel oil for heating may be more sensitive to rising prices, which in turn bears on Trump’s confrontation with Iran and Venezuela. Meanwhile, Pennsylvania is the only one of 15 states with a low- or zero-emissions vehicle program where Trump won the popular vote in 2016, according to ClearView Energy Partners.

Such complex networks of influence and impact perhaps explain why Trump has resorted to trying to end-run the energy market in certain respects. For example, trying to force through subsidies for coal-fired power plants offers one route to garnering votes from miners while also supporting fracking – and socializing the costs and inefficiencies more opaquely across the broader electorate. In what has become a hallmark of his administration, Trump’s electoral instincts push him to divide that which is inherently linked.

(1) These data are taken from ClearView Energy Partners’ “Energy Policy by the Numbers, 2019 Update”