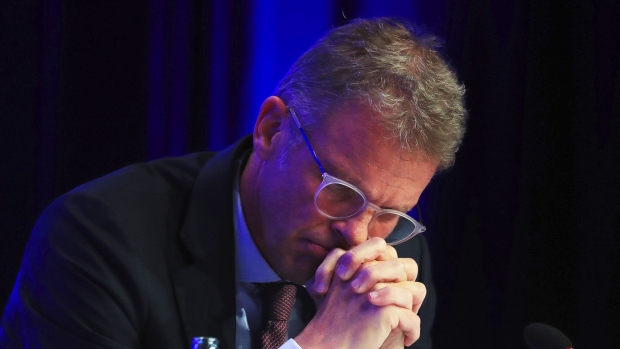 Light trails from passing traffic illuminate a road outside Deutsche Bank AG's campus office building at night in Frankfurt, Germany, on Wednesday, May 23, 2018. Deutsche Bank will cut a quarter of equities jobs and reduce overall positions by at least 7,000 as Chief Executive Officer Christian Sewing seeks to slash costs and boost profitability at the investment bank. , Bloomberg

His success selling complicated hedging derivatives to companies in Spain was legendary among London’s traders. Peers gazed at his results with envy and tried to replicate it. Other banks tried to poach him, including Goldman Sachs Group Inc. in 2017.

Now, some of that business is part of an internal probe at Deutsche Bank into whether products were mis-sold to customers, according to people familiar with the matter. The investigation, which began after Ferri-Ricchi left the bank, is known as Project Teal and has played a role in the subsequent exit of several employees and senior executives.

Complex currency trades that blew up on Spanish companies have prompted lawsuits and regulatory complaints against multiple major banks. Deutsche Bank's internal probe is looking at dozens of deals and has led to a few settlements. That's all complicating Chief Executive Officer Christian Sewing’s efforts to fix the lender after years of crises that have tarnished its reputation and cost billions of dollars.Details of the probe are based on conversations with more than a dozen people familiar with the matter, including current and former employees of the bank, who spoke on condition of anonymity discussing private matters.

The potentially large sums involved were underlined this month after a 500-million-euro suit by Spanish hotel chain Palladium Group in London’s High Court came to light. The lawsuit alleges that the Ibiza-based company entered into hundreds of “highly complex” transactions with the German lender, which were “impossible” for Palladium to price, value or understand the risks of.

The “claim is without foundation and we will be vigorously defending ourselves against it,” a Deutsche Bank spokesman said by email last week. The bank isn’t currently aware of any other claims filed by the affected companies and, in any event, doesn’t expect potential future claims in the matter to be equally large, the spokesman said.

Ferri-Ricchi, who isn’t a defendant in the Palladium suit, is described in the claim as Deutsche Bank’s main contact with the Spanish firm. He joined Deutsche Bank in 2005 and was known for his expertise in swaps and derivatives, which were the focus of his doctoral thesis at Spain’s Universidad Complutense de Madrid.He denies, via his lawyers, the allegations in the Palladium lawsuit or that he was ever involved in any mis-selling. He also says he’s not involved in any internal Deutsche Bank investigation.

Ferri-Ricchi “did not mislead customers and was not responsible for the sale of high-risk foreign exchange (or other) products to inexperienced customers without appropriate warnings, or indeed any form of alleged ‘mis-selling’,” his lawyers wrote. “He is named in the court filings because he was the client relationship manager for PHG, not because he has done anything wrong.”

People with knowledge of the matter say the unit once-headed by Ferri-Ricchi, who left the bank in mid-2019 and now works at JB Drax Honore, is a significant part of the ongoing probe’s focus. Drax declined to comment.

A number of the people who spoke to Bloomberg said the size of the revenue generated by Ferri-Ricchi’s desk means Deutsche Bank bosses would have monitored its activities closely. That would mean stringent approvals for risk and checks to ensure clients were given appropriate documentation and knew what they were buying.

The suit claims Palladium’s relationship with Deutsche Bank started after Ferri-Ricchi travelled to Ibiza in October 2012 to meet with the Matutes family, owners of the hotel company. There he laid out a strategy termed the “DB Haven Liability Cheapener.”

It would initially effectively eliminate losses on interest rate swaps the company had entered into with other Spanish banks by allowing Palladium to take the other side of the transactions, according to the lawsuit. After two years, it would pay a coupon to Deutsche Bank linked to an index of currencies.

Palladium entered into the trades in January 2013. Hundreds more followed between 2014 and 2019. Palladium claims that as various trades soured, Deutsche Bank would promote the benefit of restructuring them, which added fees and ultimately led to further losses. The Spanish firm says it was sold so many products by Deutsche Bank that they had a notional amount of 5.6 billion euros at the peak in October 2017 — dwarfing its balance sheet.

In all there were more than 250 transactions — mainly renewals and roll overs. The last of those was a dual currency arrangement transacted on Oct. 11, 2019, the lawsuit says, which claims all of Palladium’s material dealings with the German lender were through Ferri-Ricchi, Deutsche Bank employees acting under his instruction or because of his relationship with the Spanish company.

Deutsche Bank’s internal probe traces its origins back to late 2019. Sewing was leading the Frankfurt-based lender through its biggest restructuring in decades, focused on the mammoth task of cutting thousands of jobs and managing a huge retreat from its equities business.

Then another headache landed on his desk, when Spanish clients started to complain about losses on derivatives bought from Deutsche Bank. A recent Goldman Sachs hire in the foreign-exchange operation, Ernesto Mercadante, also had concerns about the suitability of the trades. He decided to elevate it to his bosses, and it ended up going all the way to the CEO.

“There is an ongoing investigation,” Deutsche Bank said in a statement, and it doesn’t plan to comment further until “all elements” of the review are completed.

The concerns center on foreign-exchange contracts like so-called targeted accrual redemption forwards, that had been sold to numerous companies. Much of the focus of the probe is on clients in Southern Europe, particularly Spain, with a number of businesses alleging they were financially hurt.

The complicated products offer a relatively low cost way of hedging against currency moves, but also carry huge exposure to possible losses. The risks mean there’s long been a question mark on their suitability for customers that aren’t financial market professionals.

“These products are widely used by many companies and sold by many banks,” Deutsche Bank said in its statement.

Goldman Sachs and BNP Paribas SA are also facing criticism around sales of derivatives, with winemaker J. Garcia Carrion filing a complaint with U.K. regulators against Goldman. The U.S. investment bank denies wrongdoing and has sued the company for money it says it’s owed.

Deutsche Bank earlier this year paid more than 10 million euros to Garcia Carrion as part of a settlement related to the products without admitting wrongdoing. It has also compensated a few other clients, people familiar with the matter say.

Back in 2019, when Mercadante reviewed the books on the currency desk, he didn’t just alert senior executives. He also set about closing positions on some of the contracts rather than keep rolling them over, according to two people familiar with the matter. That crystallized the losses for customers that had built up, and which they now had to cover. Mercadante, who now works at Banco Santander SA, didn’t respond to multiple requests for comment.

Project Teal is focused on whether customers fully understood the products, or were in some way duped. Given the exposure, their sale should be reserved for sophisticated clients and Deutsche Bank’s investigation is looking at how clients were categorized to allow the sales.

The ongoing probe is examining the bank’s dealings with between 50 and 100 businesses. Various teams at Deutsche Bank in Madrid and London helped to structure the products and maintain relationships with customers.

Louise Kitchen, head of Deutsche Bank’s capital release unit, and co-head of global FX Jonathan Tinker left the lender earlier this year. Their departures are linked to the investigation, a person familiar with the matter previously told Bloomberg News. Kitchen declined to comment via her lawyers. Tinker didn't respond to a request for comment.

The German lender’s response to the Palladium suit offers an insight into some of the arguments that affected banks may deploy for claims they dispute. The bank says that the company knew what it was buying and was happy to continue the trades as long as they went in its favor.