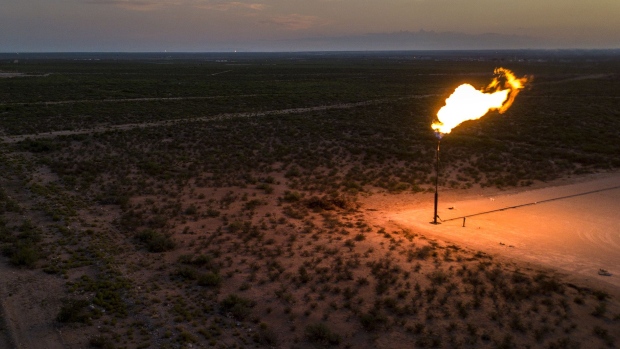 (Bloomberg) -- Investors managing more than $2 trillion are calling on Texas regulators to ban the routine burning of natural gas from shale fields, arguing that the energy industry hasn’t moved quickly enough to curb the controversial practice.

AllianceBernstein, California State Teachers’ Retirement System and Legal & General Investment Management said they support eliminating gas flaring by 2025, according to a letter to the Texas Railroad Commission, which oversees oil and gas in the state.

“Actions of leading operators demonstrate the financial and technical viability of ending routine flaring,” the fund managers said in the letter, which was seen by Bloomberg. “It is clear, however, that voluntary actions alone have been insufficient to eliminate routine flaring industry-wide.”

Investors and environmentalists are increasingly drawing attention to flaring because of its wastefulness and contribution to climate change. Flaring is utilized around the world as a way to deal with gas that producers can’t -- or don’t want to -- transport or store. Much of what’s burned, especially in the shale fields of Texas, is so-called associated gas coming from oil wells.

The sheer abundance of gas in the Permian Basin of West Texas and New Mexico means local prices for the fossil fuel are often so low that it’s cheaper for shale operators to burn it rather than pay for pipeline connections and storage. Last year the Permian flared enough gas to supply 5 million U.S. homes, according to Oslo-based Rystad Energy.

Related: Permian’s Gas-Flaring Is Much Worse Than Previously Thought

The Texas Railroad Commission has come under attack for allowing companies to effectively flare at will over the past decade as shale production boomed and helped make the U.S. the world’s top oil producer. The commission allows companies to flare during the start-up of wells and during emergencies. It also issues waivers that can be utilized right through the early and most productive phase of a shale well’s operation.

After more than a year of public pressure, the commission recently proposed requiring operators to provide information on why they need to flare, but it set no targets and resisted calls for an outright ban. Lower oil production due to the Covid-19 pandemic has meant flaring rates have dropped significantly this year, the commission said in a statement last month.

“Strong and effective regulatory action -- beyond initial steps to improve data gathering and transparency -- is essential to build stakeholder confidence and solve this challenge across industry,” the investors said in the letter, which is part of the commission’s public consultation.

LGIM, the U.K.’s biggest asset manager, oversees over 1.2 trillion pounds ($1.6 trillion). In May, LGIM said it would oppose the re-election of Darren Woods as Exxon Mobil Corp. chairman over what it called a lack of ambition on tackling climate change.

AllianceBernstein manages about $600 billion and CalSTRS oversees more than $200 billion.