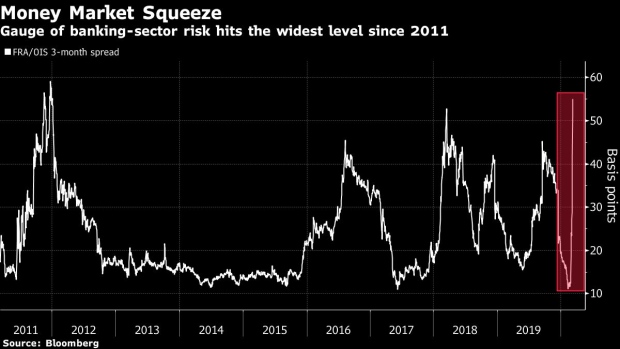 A magnifying glass is held over a 50 subject one dollar note sheet after being printed by an intaglio printing press in this arranged photograph at the U.S. Bureau of Engraving and Printing in Washington, D.C., U.S., on Tuesday, April 14, 2015. , Bloomberg

(Bloomberg) -- Fund managers are being faced with a collapse of liquidity as they try to handle record market moves.

Investors say it is becoming increasingly difficult to trade due to the extent of swings on a day that saw 30-year Treasury yields drop the most since the 1980s and a fall in U.S. stocks so sharp that trading was halted minutes from the open. Even before today financial conditions were tightening at the fastest pace since the 2008 crisis.

“I have yet to find liquidity,” said Richard Hodges, a money manager at Nomura Asset Management, whose bets on Italian and Portuguese bonds last year put him in the top 1% of money managers. “There is none.”

The dry up in liquidity was seen across markets. In Italy, one of the deepest pools of bond trading in Europe, two-year yields surged more than 50 basis points at the European open, with unreliable bid and offer prices shown on screens.

Indonesian and Mexican bonds also suffered a liquidity crunch, according to Allianz Global Investors. In money markets too, signs of stress were abundant.

A key gauge of banking-sector risk, known as the FRA/OIS spread, soared to its highest level since 2011, while dollar swap spreads widened, suggesting stresses in U.S. markets are becoming increasingly severe. A gauge of financial conditions in the U.S. tumbled, with the Federal Reserve on Monday lifting the amount of temporary cash it’s willing to provide markets.

“The one thing I would say to buy is Treasuries,” Priya Misra, global head of rates strategy at Toronto-Dominion Bank, said on Bloomberg Television, pointing to the risk of other markets drying up. “If you own a ton of risk assets, the only safe haven asset right now is the 30-year. It’s shocking that I’m saying it.”

While oil and stocks slump, bonds have seen massive inflows, with 30-year Treasury yields plummeting almost 60 basis points and European rates hitting record lows. The U.K. became the latest to join the negative-yield club, which now encompasses over a quarter of the entire investment-grade market. Germany’s entire yield curve is below 0%, with five-year yields touching -1%.

For those investors who are old enough, it’s a hark-back to 2008’s financial crisis. For a newer generation, it poses an unprecedented challenge -- how to preserve the value of your investments.

A significant reason for the lack of depth in bond markets is the emergence in stress indicators of uncertainty about what the Fed will do next. One example is the fluctuations in liquidity in the financial system.

Liquidity strains are unleashing “deep-seated fears that the coronavirus crisis could lead to the same dislocation of financial markets that we saw over a decade ago,” wrote Steven Barrow, head of foreign-exchange strategy at Standard Bank, in a note to clients. “The worst-case scenario for the market is that dollar liquidity shortages start to emerge, putting leveraged borrowers in jeopardy.”

In turn, volatility has spiked. The Bank of America Merrill Lynch MOVE Index, which measures price swings in Treasuries, jumped to the highest level since 2009 Monday. Funds that brace for so-called “black swan” events are one of the few to benefit.

Liquidity holes and the unleashing of suppressed volatility has seen convexity options outperform given the acceleration in volatility gains as tail risks reprice. For example, VIX calls funded by SPX puts would work for those looking for long convexity exposure. Now, extracting vol premium should come into play while managing the further deterioration of risk.”

For Nomura’s Hodges, the problem is exacerbated by the proliferation of exchange-traded funds, which track particular asset classes or instruments. When the market goes into freefall, they are required to sell the underlying asset, prompting a frantic search for anyone who will buy it.

“People are asking for bids and then dealing when they see them,” said Luke Hickmore, a money manager at Aberdeen Standard Investments. “You can definitely sell for sure, you just might not like the price.”

--With assistance from Greg Ritchie and Edward Bolingbroke.

To contact the reporters on this story: John Ainger in Brussels at jainger@bloomberg.net;Anooja Debnath in London at adebnath@bloomberg.net

To contact the editors responsible for this story: Dana El Baltaji at delbaltaji@bloomberg.net, Neil Chatterjee