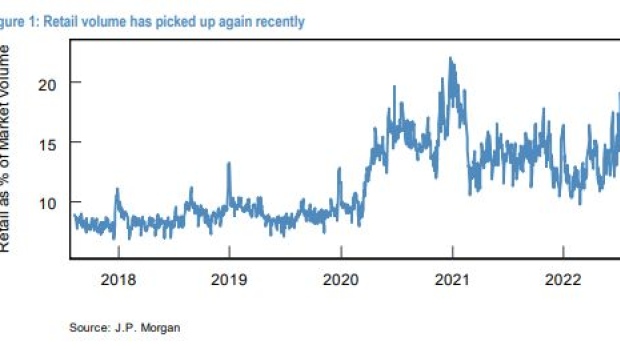 (Bloomberg) -- Nobody saw it coming, and now everyone wants in.

That’s a nutshell synopsis of how an improbable equity market bounce is threatening to become a meltup. Hedge funds slashed stocks, mutual funds flocked to cash, and even hard-to-daunt retail traders reined in their glee, draining the market of sellers and creating a backdrop where the slightest good news forced everyone back.

That’s what investors got Wednesday, news inflation had cooled -- slightly -- from a generational high. The result was a dash back into risk assets as well as short-dated government bonds, with both markets interpreting July’s consumer price index as giving the Federal Reserve room to breathe in coming months.

“It was more a sentiment rally and technical rally than anything to do with fundamentals or macro,” said Victoria Greene, founding partner and chief investment officer at G Squared Private Wealth. “Some will worry about FOMO. We will be patient.”

The speed with which views are evolving can be seen in notes from Michael Purves, founder of Tallbacken Capital Advisors. Days after slashing his year-end target for the S&P 500 to 4,500 from 5,500, the market veteran said Wednesday’s rally pushed through some key chart levels that open the door for “an abrupt move” to 4,400. The index closed at 4,210 Wednesday.

“This recommendation does not suggest we think we are out of the woods and we are back to a sustained buy the dip condition,” Purves wrote in a note. “But we are dealing with a high volatility environment -- and that volatility can work both ways.”

The S&P 500 climbed 2.1% Wednesday to a three-month high, led by economically sensitive shares like chipmakers and car manufacturers. The Nasdaq Composite Index advanced 2.9%, extending its gain from its 2022 trough past 20%, a threshold that can be framed as indicating an end to its bear market.

Traders quickly dialed back on the amount of tightening that the Fed is likely to carry out, sending Treasury yields lower at the front end of the yield curve. Longer-dated bonds gave back earlier gains after two Fed officials warned that the central bank was a long way from ending its tightening cycle, let alone reversing it.

In stocks, right now, the pain trade is clearly upward for those who cashed out during the rout that marked the worst first half in five decades. And there are signs that money is flocking back.

In the past week, individual investors gobbled up an estimated $3.4 billion of shares, 62% higher from the previous week, industry data compiled by JPMorgan Chase & Co. showed.

Around the market’s trough in June, retail investors gave up on their long-held bullish stance, selling shares at the fastest pace in almost two years, according to data tracked by JPMorgan. Meanwhile, hedge funds that make both bullish and bearish wagers cut their net exposure to the lowest level since 2009, client data compiled by Morgan Stanley’s prime broker showed.

While stocks kept marching higher in July, the mood only got darker, with Bank of America Corp.’s survey of money managers pointing to the lowest equity allocation since October 2008.

All the bearishness was met with a painful reckoning as the equity rally showed no signs of abating, or at least not yet. Up 15% from its June trough, the S&P 500 has broken resistance after resistance, with the index sitting around 20 points from recouping half of its bear market losses, a milestone that some chartists say will herald a full recovery.

Bears have been forced to unwind their bets against stocks. Hedge funds tracked by Morgan Stanley last week covered their shorts at one of the fastest paces this year. So did some rules-based quant traders who had ratcheted up their short positions in the futures market.

The unwinding has helped spur a 33% surge in a basket of most-shorted stocks since July, including a 5.1% gain on Wednesday.

Animal spirits are awakening among the retail crowd. They piled into the risky fringe of the market, from freshly minted stocks such as AMTD Digital Inc. to their long-time favorite meme names like AMC Entertainment Holdings Inc. The urge to make quick money has promoted small-fry investors to pick up an old habit of trading call options -- weeks after they paid near-record premiums for bearish puts versus calls.

Along the market recovery, Jack Ablin, chief investment officer at Cresset Capital, has stayed cautious, though Wednesday’s rally is giving him confidence that the worst of the rout has run its course.

“While one month doesn’t a trend make, we’re heartened by the direction in price activity,” he said. “We remain underweight equities, but today’s report provides further evidence that the bottom in stocks is behind us.”