As 2019 draws to a close, many stock investors have at least one reason to sell low: reduce their tax bill. While that may sound like an interesting opportunity, it could also mean wild gyrations for two of the nation’s riskiest industries.

Both energy and pot shares are standing out among the biggest losers in Canada’s stock market this year. Oil and gas producers have been flailing as foreign companies pull investment from oil-sands projects amid a slump in Canadian crude versus the U.S. benchmark due to pipeline bottlenecks. Meantime, several marijuana companies have yet to turn a profit.

About 70 per cent of the energy stocks in the S&P/TSX Composite Index have hit one-year lows this year, and fewer than half of its companies have posted double-digit gains, according to data compiled by Bloomberg. The iShares S&P/TSX Capped Energy Index ETF has dropped about  one per cent in 2019, compared with an 18 per cent surge in the benchmark gauge of Canadian equities.

“It seems reasonable to assume that there could be some tax-loss selling into year-end, particularly since the S&P/TSX Composite Index is up,” analysts led by Menno Hulshof at TD Securities Inc. said. Energy service providers and oil and gas mid-and-smallcaps “will be most prone to further weakness into year-end.” 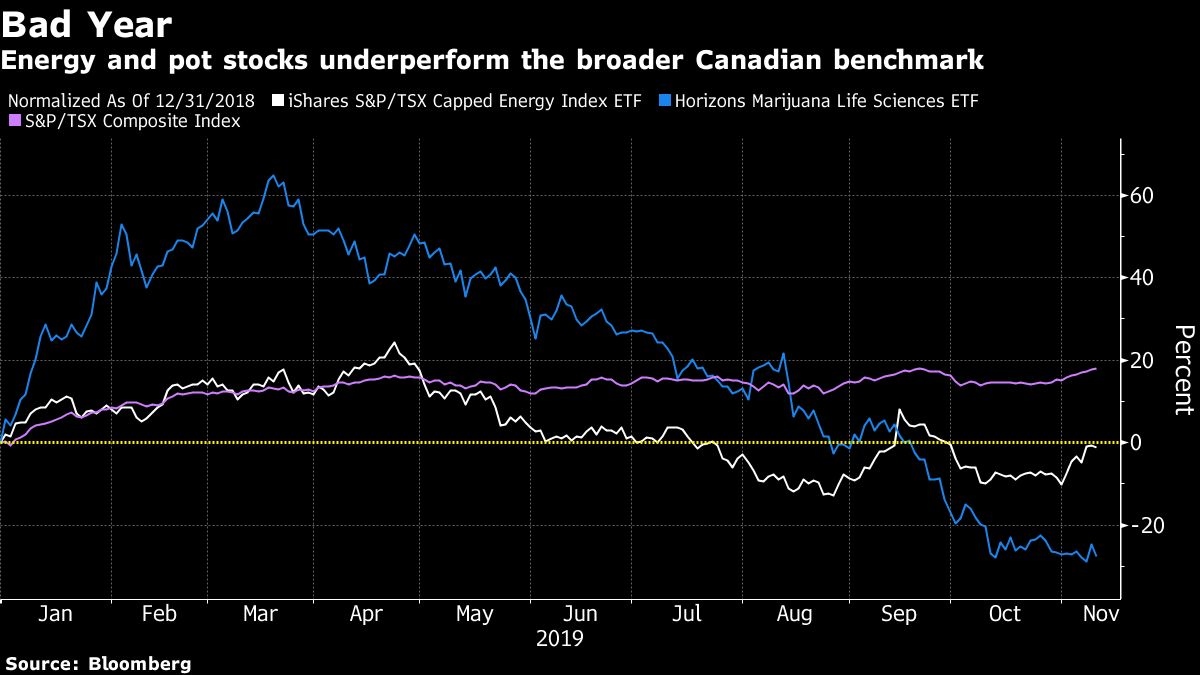 Pot stocks have also been feeling the pinch as many companies continue to bleed cash and vaping lung injury concerns persist. The Horizons Marijuana Life Sciences ETF has plunged more than 50 per cent since its March peak, and most weed shares have never regained the high they hit last year.

“Such underperformance begs the question: what happens to the sector when tax-loss selling begins?” said Graeme Kreindler, analyst at Eight Capital. While investor sentiment suggests tax-selling loss could occur, sending stocks even lower, he said it’s difficult to confirm whether that has already happened or it will continue for the rest of the year.

To make things worse, analysts aren’t expecting stellar results. For MKM Partners’s Bill Kirk, this week “is going to be book-ended with cannabis disappointment” as Canopy Growth Corp. and Aurora Cannabis Inc. are slated to report on Thursday. Strategists at Canadian Imperial Bank of Commerce and Cantor Fitzgerald are also adding to the growing chorus that it’ll be a weak earnings season.

Now, there may be some light at the end of the tunnel as the tax selling could also bode well for some investors. Further weakness in energy stocks “could potentially create a buying opportunity in late December, early January,” Hulshof said.