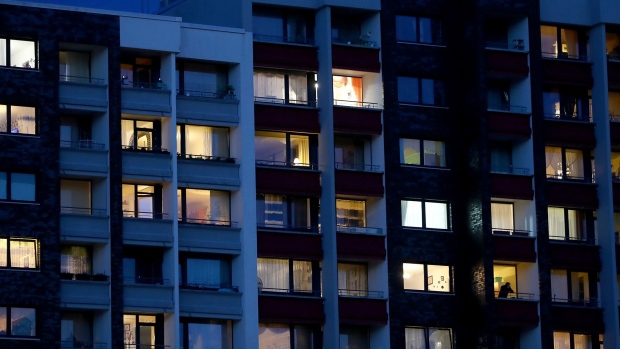 TORNESCH, GERMANY - MARCH 24: Light pours from windows in a residential apartment building during the early evening on March 24, 2020 in Tornesch near Hamburg, Germany. Due to heavy restrictions imposed by authorities on public life in an effort to slow the spread of the coronavirus, including the temporary shuttering of restaurants and bars, most people across Germany are currently staying home in the evenings. (Photo by Martin Rose/Getty Images) , Photographer: Martin Rose/Getty Images Europe

(Bloomberg) -- Italy’s economic development minister warned of the risk of blackouts across Europe as Prime Minister Mario Draghi reaffirmed the government’s readiness to counter the effect of rising energy prices on consumers.

“Given the current energy supply system, a blackout cannot be ruled out” in Europe, Minister Giancarlo Giorgetti said in Rome on Tuesday. “It is important to neutralize the impact of increased energy bills on households and companies in the fairest way possible”.

Speaking earlier on Tuesday in Rome, Draghi reaffirmed his government’s readiness to do just so. He said Italy is ready to step in again to reduce the impact of surging energy costs, particularly on poorer households.

“We set aside 1.2 billion euros ($1.4 billion) in June and over 3 billion euros in September,” Draghi said. “We are now taking steps in the budget and are prepared to continue doing so, with particular attention to the most vulnerable.”

Italy has asked the European Commission to study medium-term responses to the trend of higher power bills across the continent, for instance through measures focused on the energy storage business aimed at limiting price fluctuations. The bloc’s energy ministers meet Tuesday in Brussels to discuss the energy crunch.

Read more: Europe’s Energy Crisis Is About to Get Worse as Winter Arrives

European power prices have been breaking records, while the region is back at the epicenter of the pandemic. The economy could take a hit as restrictions are tightened in some countries just when household budgets are already being squeezed by inflation.

“Until March we are playing it by ear,” he said in Rome. “In Europe we are all on the same line: this contingency should end in March.”

For Draghi, Italy needs to seize opportunities in so-called ecological transition to reduce its dependence on energy sources like gas, while also taking measures to mitigate the effect of the shift on lower-income citizens.

“We need to enter into the most innovative market segments, such as production of batteries, and create new ones able to satisfy the needs of businesses and consumers,” the premier said.

(Retops and updates throughout)