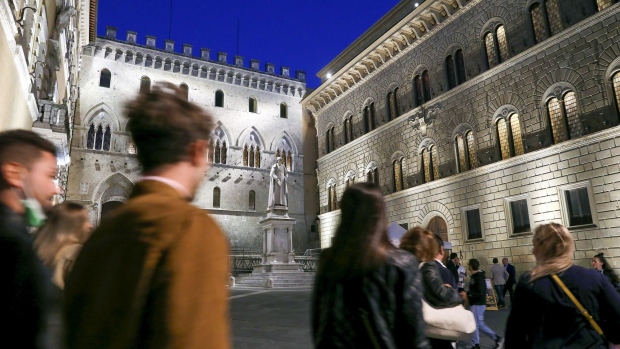 The statue of Sallustio Bandini, an economist and politician, stands in Piazza Salimbeni in front of Banca Monte dei Paschi di Siena SpA bank headquarters in Siena, Italy, on Sunday, Sept. 19, 2021. After more than 500 years as a pillar of prosperity in the hills of Tuscany and a decade or so as a byword for dysfunction, Banca Monte dei Paschi di Siena SpA appears to be entering the final chapter of its history. Photographer: Alessia Pierdomenico/Bloomberg , Bloomberg

The Italian government and Milan-based UniCredit under Chief Executive Officer Andrea Orcel said in a joint statement on Sunday that they were no longer pursuing talks. The two sides were unable to agree on how much new capital Monte Paschi needed before the sale and the assets to be transferred, people familiar with the matter said.

Italy will now seek an extension to the year-end deadline for divesting the lender, which was nationalized in 2017, some of the people said. The time limit was a condition for the EU’s blessing of the previous bailout.

The collapse of negotiations is a blow for both Draghi’s government and Orcel who spent months in politicized wrangling over the future of the 500-year-old nationalized bank. While Draghi may yet have other options, including keeping a recapitalized Monte Paschi as a stand-alone, UniCredit had remained the favored solution even under the demanding conditions that Orcel had set.

An spokesman for the finance ministry was not immediately available to comment on the extension of the sale.

Read More: Orcel Wrestles Italy Over the Remains of the World’s Oldest Bank

The end of talks also raises questions about the long-awaited consolidation of the Italian banking sector. Banco BPM SpA, Italy’s third largest bank, is likely to now be again at the center of speculation -- both as a possible buyer of Monte Paschi and a new target for UniCredit.

The 58-year-old Orcel, who became UniCredit CEO in April, required that the transfer of Monte Paschi assets would be capital neutral for his bank and be positive for the lender’s earnings per share.

Orcel had argued that the Siena-based Monte Paschi needed about 7 billion euros ($8.2 billion) to restore Monte Paschi’s capital buffers and cover the costs of job exits. That was about three times higher than the initial estimate of the Treasury.

Having built a reputation as a hard-driving dealmaker who has brokered mergers and acquisitions across Europe, the former UBS Group AG investment bank head has now stumbled in his first big transaction back on home soil.

For Draghi, the sale would have brought a tidy end to a turbulent chapter in Italian banking history, after multiple bailouts, criminal charges and nationalization in 2017. Both men had been involved in Monte Paschi’s disastrous acquisition of Banca Antonveneta SpA almost 15 years ago that signaled the beginning of the bank’s downfall.

The government may still seek to revive talks with UniCredit in the future, people familiar with the matter said.

The Treasury may go ahead with some of the measures envisaged in the talks with UniCredit to make the deal compelling for new investors, including a capital injection, the sale of bad loans, a voluntary-based job exit plan, with the state taking on Monte Paschi’s legal risks, they said.

Italy is also set to extend a deadline to benefit from tax relief from the end of the year to June 2022, in order to get extra time to negotiate a new sale, according to the people.

A sale had been seen as the only viable option to deal with the lender which faced weak profitability and a legacy of billions of euros in non-performing loans. A day after UniCredit announced talks to buy it, Monte Paschi emerged as the worst performer in European stress tests, and the only one to have a key measure of capital wiped out.