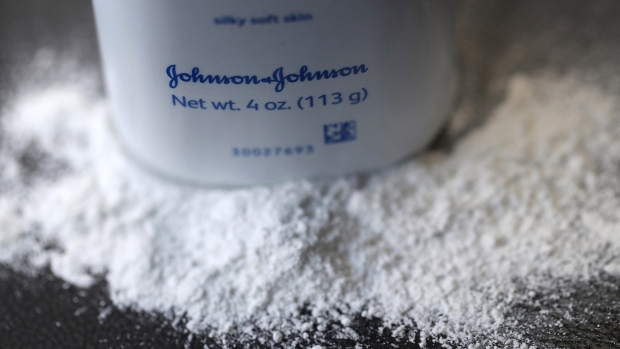 In this photo illustration, a container of Johnson's baby powder made by Johnson and Johnson sits on a table on July 13, 2018 in San Francisco, California. Getty Images North America/Justin Sullivan

Johnson & Johnson won’t set aside any legal reserves for the more than 100,000 lawsuits it faces across its portfolio of drugs, consumer products and medical devices, saying it expects to fight and win many of the claims.

The company has spent US$832 million on litigation expenses this year, and outside estimates of damages from lawsuits over opioids, psychiatric drugs, talc powder and medical devices range in the tens of billions of dollars. While several large verdicts have attracted headlines, J&J Chief Financial Officer Joseph Wolk said the company expects to fight and win many of the thousands of cases.

“Right now if you think about some of the cases that are out there, they are likely subject to our prevailing on appeal,” Wolk said in an interview on Bloomberg Television. “There’s nothing to book, nothing to accrue. It wouldn’t even meet the accounting standards.”

Setting aside legal reserves is an accounting matter, and companies don’t typically include them until they believe they can be reasonably estimated.

The lawsuits have overshadowed the company’s otherwise robust business results. J&J reported third-quarter earnings Tuesday and raised its full-year profit forecast after beating analysts’ estimates, thanks to growing sales in its drug unit and what it touted as strong results in medical devices. But the shares are still well-off their 52-week high in December.

“Investors are starting to come around. They’re starting to get an appreciation, a better certainty around the level of risk that actually is within the stock,” Wolk said.

J&J rose 1.9 per cent before the markets opened in New York. The New Brunswick, New Jersey-based company’s stock is up 1.3 per cent this year so far.

Profit was up from a year before, with net earnings of US$4.83 billion in the third quarter, versus US$3.93 billion a year prior.

Wolk said the company would continue to defend claims that it thought it could win.

“The management team here will look at what a reasonable outcome could be for all stakeholders involved,” Wolk said. “When products are safe, when they’re effective, we’re going to look to make sure that those products aren’t subject to what’s become unfortunately a big business model for plaintiff’s attorneys.”

The accusations against the drugmaker are substantial. Last week, a jury ordered J&J to pay US$8 billion for wrongfully pushing doctors to prescribe the anti-psychotic drug Risperdal to the elderly and to children — though the verdict is unlikely to be upheld on appeal. In 2013, the company agreed to pay US$2.2 billion to resolve civil and criminal claims brought by the U.S. government that it illegally marketed the drug. Some teenage boys who took the pills developed female-sized breasts and sued the company.

The company has also been accused of helping drive the U.S. opioid epidemic, and is one of two dozen companies that have been sued by states, cities and counties. It In March, it lost a lawsuit brought by Oklahoma and was ordered to pay US$572 million for wrongfully marketing its pain drugs in the states.

Not even its consumer unit has been immune. More than 15,000 suits claim the company’s talc powder caused different types of cancers because of contamination with asbestos. Amid the scrutiny, J&J has relaunched many products in its baby unit. Sales there have yet to recover, with U.S. revenue in the baby care group down 24 per cent from a year prior, to US$91 million.

--With assistance from Jef Feeley