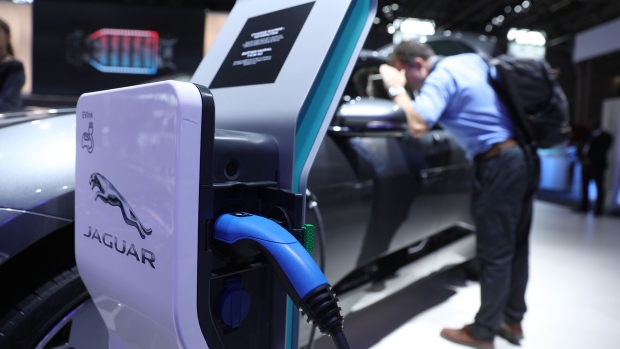 An electric charging station stands on the Jaguar exhibitition stand at the Paris Motor Show in Paris, France, on Wednesday, Oct. 3, 2018. The auto industry -- a slice of it at least -- converges in France this week for the biennial Paris Motor Show, where executives are showing off electric cars for the masses, robo-cars for the future and the self-proclaimed quickest car in the world. , Bloomberg

(Bloomberg) -- Jaguar Land Rover Automotive Plc said it would teach 60% of its global workforce to develop, manufacture and service electric vehicles as the carmaker tries to set itself up for a post-fossil fuels future.

The British company said it would train 29,000 of its own employees as well as workers in franchised dealerships. A majority of the company’s retail technicians will be taught to repair and service electric vehicles during this financial year, JLR said in a statement Wednesday, adding that almost 10,000 of the workers are in the UK.

Automakers around the world have been working to re-skill workers as they ramp up electrification plans. In July, Mercedes-Benz Group AG said it would spend more than €1.3 billion ($1.25 billion) on training staff through 2030.

JLR has previously announced plans to completely ditch combustion engines at Jaguar, the smaller of the two brands, by 2025, while Land Rover will get its first fully electric model in 2024. The carmaker has struggled in recent months as semiconductor shortages hobbled deliveries of its luxury SUVs and sports cars.