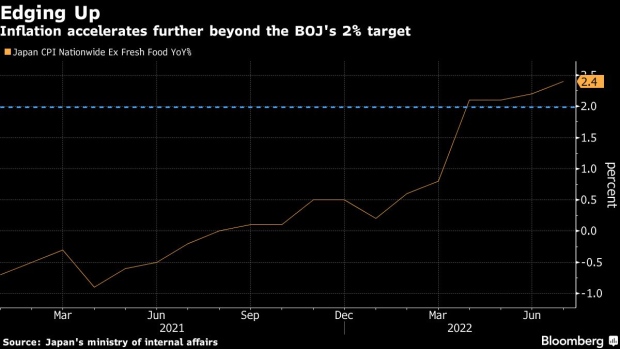 A customer picks up Japanese 1,000 yen banknotes at a butchery stall inside the Hachioji Wholesale Center in Hachioji, Tokyo Metropolis, Japan, on Tuesday, Aug. 2, 2022. Yen swings between small gains and losses with markets weighing tension over Taiwan and the Federal Reserve’s monetary path. , Bloomberg

Consumer prices excluding fresh food rose 2.4% in July from a year ago, with energy costs accounting for around half the gains, the internal affairs ministry reported Friday. The result matched economists’ estimates and was the strongest reading since 2008 excluding the impact of sales tax hikes.

Economists say the pickup in inflation is unlikely to cause the BOJ to start withdrawing its monetary easing for now. Kuroda has repeatedly said that current commodity-driven inflation is temporary, and that stronger wage gains are needed for the sort of positive growth cycle sought by the central bank.

Still, the gains are likely to put further pressure on Kuroda to explain the logic behind keeping policy unchanged, with analysts increasingly seeing gains going beyond just energy prices.

“If core CPI reaches 3% this year, market pressure on the BOJ will increase again,” said Mari Iwashita, chief market economist at Daiwa Securities Co. “The more adamant the BOJ becomes to maintain its policy, the stronger market pressure will become.”

Japan remains an outlier among its advanced economy peers, as others continue to raise interest rates aggressively to tame inflation.

“The pickup in core inflation further above the Bank of Japan’s 2% target in July highlights a rising cost of living that will damp household spending in the third quarter. .”

Inflation remains relatively subdued in Japan compared with other major economies, partly because of government measures to limit price gains. Prime Minister Fumio Kishida has ordered another round of measures to be compiled by early September, while the government estimates his first package is shaving 0.5 percentage point off overall consumer prices through September. They rose 2.6% from a year ago in July.

To monitor the underlying strength of inflation, the BOJ also watches consumer prices excluding fresh food and energy. That measure of inflation strengthened to 1.2%, the strongest since 2015.

The report showed energy remained a key driver of inflation, pushing up overall prices by 1.2 percentage point. Processed food prices edged up 0.8 percentage point, up from the previous month’s 0.7 point gain, contributing to July’s acceleration. More expensive cell phones also helped nudge up inflation as manufacturers such as Apple raised the prices of their smartphones in Japan to reflect weakness in the yen.

The weaker yen on the back of ongoing BOJ monetary easing has drawn criticism, as it makes imports more expensive and adds to the pain for consumers and households. The yen has rebounded slightly since hitting a 24-year low versus the dollar in July, when it weakened to around 139 against the greenback.

“Foreign exchange holds the key to whether core CPI will hit 3%,” said Daiwa’s Iwashita. “It can get there if the yen weakens to 140 versus the dollar.”

Both Kishida and Kuroda have called for robust wage gains to ensure that inflation is sustainable. Companies and unions agreed on pay hikes and the minimum wage is poised to rise the most on record this year, but overall wage gains continue to trail inflation.

(Updates with more details from the report, economist comments. An earlier version of this story was corrected to fix detail of core inflation excluding energy.)