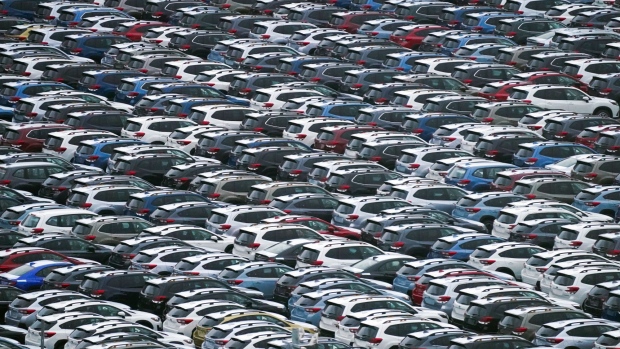 Vehicles bound for shipment parked at a port in Yokohama on May 12. Photographer: Toru Hanai/Bloomberg , Bloomberg

(Bloomberg) -- Japanese manufacturers are increasingly looking to move offshore operations to their home market, according to a Tokyo Steel Manufacturing Co. executive.

The rapidly weakening yen, global supply-chain constraints, geopolitical risks and shifting wages patterns are prompting the switch, Kiyoshi Imamura, a managing director of the steelmaker, said in an interview in Tokyo last week.

Among those moving manufacturing to Japan are makers of everything from auto parts to cosmetics and consumer electronics, he said, with the trend expected to accelerate toward the end of this year.

According to Imamura, more Japanese companies are shifting operations out of China, Southeast Asia and Russia. The move to build new plants in their home country is fueling demand for steel used in construction, with the company receiving nearly 30 orders related to such switches, he said.

“The yen has fallen so much that Japan’s trade balance won’t be back in the black -- under such circumstances, companies judge it’s better to do manufacturing in Japan,” Imamura said. His company has seen orders for steel used in construction rise 10% so far this year, compared with a year earlier, he said.

Even before the yen’s tumble this year, the Japanese government has been supporting relocation of domestic companies’ production bases back to the country.

The Ministry of Economy, Trade and Industry is funding companies to assist them to invest in new plants that makes crucial products and materials to alleviate the risks of supply-chain bottlenecks. In November, the government also approved 774 billion yen ($6 billion) in funding for domestic semiconductor investment.

“Now that the yen has weakened, it’s no surprise more companies will work on boosting domestic production capacity,” Takayuki Homma, chief economist at Sumitomo Corp. Global Research Co., said in a separate interview. The falling yen, which was increasing export margins, was “offering an option to ship goods from Japan strategically,” he said.

Surging labor costs in other nations are also a factor. Imamura said Japan’s wages have barely changed over the past 30 years, while wages in Southeast Asia have roughly tripled over the same period.

Takeshi Irisawa, an analyst at Tachibana Securities Co. in Tokyo, agreed the trend was a bright sport in Japan’s steel market. Still, he noted the country’s entire demand for steel used in construction was stagnant, and recent spikes in steel prices “will be a setback, making it a little difficult for the lower yen” to be a big driver for Japanese production in the short term.

The companies moving operations to Japan also face other hurdles, including high electricity costs and a shortage of labor due to the nation’s shrinking and aging population, said Homma. They will need to be innovative in both efficiently producing goods with fewer workers and coming up with value-added products.

Imamura also said more nuclear power generation was essential to revive the competitiveness of manufacturing in the country. He joined calls by Japanese companies to quickly restart nuclear reactors that were idled after the Fukushima disaster more than a decade ago as the nation grapples with soaring energy costs.