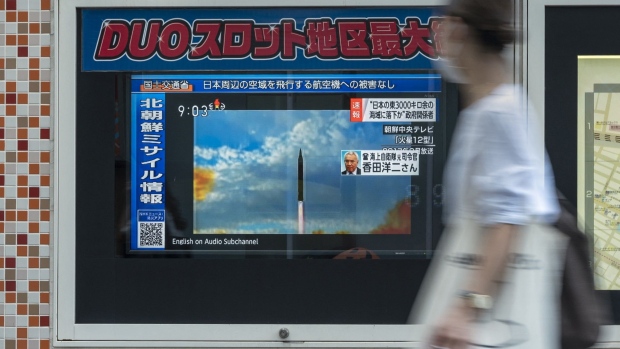 A broadcast showing file footage of North Korean missile launches after the country fired a missile that flew over northeastern Japan, in Tokyo on Oct. 4. Photographer: Richard A. Brooks/AFP/Getty Images , Getty Images via Bloomberg

But there was one major problem: By the time many people were aware of the alert, the missile had already splashed down in the Pacific Ocean more than 3,000 kilometers (1,870 miles) away. What’s worse, it passed so far overhead -- more than twice the altitude of the International Space Station -- that it posed no threat at all.

Given only seconds to react to what amounted to a false alarm, many in Japan quickly began questioning the effectiveness of the alert system -- and wondering more broadly if the government was capable of protecting the country in an actual attack. In rural areas where the alerts sounded, lots of homes are made of wood and don’t have places to hide.

“I’m scared,” one Twitter user who goes by the handle of Kiora wrote after the so-called J-Alert. “I don’t have a shelter or a basement.”

The panic that ensued from North Korea’s first missile over Japan since 2017 may actually end up helping those in Prime Minister Fumio Kishida’s government who want a more aggressive military response against threats from Kim Jong Un, as well as China and Russia.

As Japan expands missile defense spending to record levels, some in the ruling Liberal Democratic Party are also seeking the capability to preemptively strike adversaries. This includes finding ways to reconcile such a move with the country’s pacifist constitution, which renounces “the threat or use of force as means of settling international disputes.”

“We have been a pacifist country up to now, but we can’t stand by and do nothing,” said Kyoko Hatakeyama, a professor at University of Niigata Prefecture who specializes in security policy. “And if it’s judged that missile defense isn’t enough, then we will have to move on to discussing this capability to attack enemy bases.”

Missile-interceptor systems deployed worldwide have been faulted for shortcomings that could let missiles through, and the ones deployed by Japan are no exception. The J-Alert reminded people on the ground that not much can be done for protection even with a warning.

By that time, however, the missile was already overhead for most people receiving the alert. And most residents had no idea where to go anyway. While Japan has more than 94,000 evacuation facilities nationwide, including schools and community centers, only 1.4% have basements that can offer shelter, according to government data.

In an embarrassing mistake, the prime minister’s office posted an alert on its English-language Twitter account Thursday that a North Korean missile had again flown over the country. It later issued a correction to the account that has 274,000 followers, saying that Pyongyang had launched a suspected ballistic missile.

Authorities in Tokyo have defended the J-Alert system, saying it can help ensure the safety of residents in the face of earthquakes, natural disasters, terrorist attacks and ballistic missiles from North Korea, which the government says could reach Japan in 10 minutes or less.

Japan’s missile defenses are set up to intercept lower-flying missiles and have no ability to shoot down something like the intermediate-range one North Korea fired Tuesday, which are designed to hit targets further away such as American military bases in Guam. Japan’s Defense Ministry says that since there’s so little time to act, it would fire interceptors before asking for permission from political leaders.

“Japan’s missile defenses are amongst the best in the region but could be better,” said Nah Liang Tuang, a research fellow at the Institute of Defence and Strategic Studies at Nanyang Technological University in Singapore. “The number of anti-missile systems on the ground could be increased for better coverage.”

The biggest threat to Japan may be North Korea’s Pukguksong series of two-stage, solid-fuel, nuclear-capable ballistic missiles, which are quick to deploy and can be fired by land or from a submarine to almost anywhere in Japan. Even the older versions can travel at speeds of Mach 8 and higher, meaning they could be already hitting parts of Japan before a J-Alert goes off.

When China fired a barrage of missiles over Taiwan in August to protest a visit to the island by US House Speaker Nancy Pelosi, five splashed down in waters that Japan says are part of its economic exclusive zone. No J-Alert was sent and Japan didn’t release information about the missiles that landed near its island of Ishigaki until several days later.

While North Korea’s latest missile ended up further away from Japan, it may ultimately spur more action.