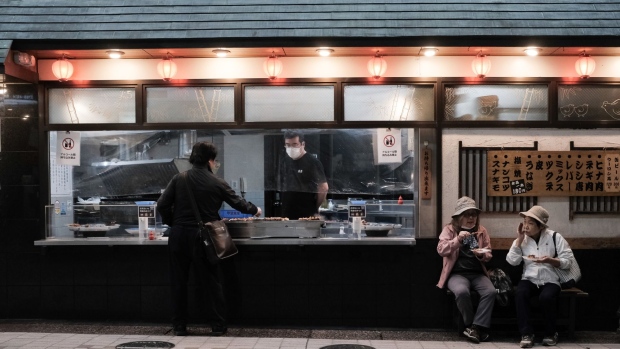 Customers in front of a yakitori store in Tokyo, Japan, on Wednesday, Oct. 19, 2022. September figures due Friday are expected to show Japan’s key inflation gauge hitting 3%, the highest in about 30 years after factoring out tax distortions. , Bloomberg

(Bloomberg) -- Japan’s economy took a smaller hit than first thought during a summer marked by a renewed Covid surge and a plunge in the yen, with a return to growth expected this quarter.

Gross domestic product shrank an annualized 0.8% in the three months to the end of September from the previous period, revised figures from the Cabinet Office showed Thursday. That was smaller than the 1.2% contraction first estimated and a 1% drop forecast by economists.

The revised figures showed that stronger exports reduced the heavy negative impact on trade from the yen drop, and that capital spending by firms held up.

A buildup of inventories also helped narrow the contraction of the economy, though that also suggests there wasn’t enough demand for the output of factories. The data also showed consumption was weaker than first thought during the summer Covid surge and inflation acceleration.

Overall, the figures didn’t improve enough to eliminate concerns among policymakers over the resilience of the economy. Japan heads toward the end of the year and into 2023 with clouds darkening over the global outlook, and the possibility of recessions in key overseas markets.

“The weaker consumption worries me,” said Harumi Taguchi, principal economist at S&P Global Market Intelligence. “Spending hasn’t picked up much in the current quarter, either, probably because of inflation and another rise in Covid infections.”

“Details under the hood of Japan’s narrower third-quarter GDP contraction aren’t encouraging. A buildup in inventory that contributed to the upward revision will limit catch-up production in 4Q.”

Prime Minister Fumio Kishida has already put together an economic stimulus package to cushion the impact of strengthening inflation that should offer more support for growth early next year. Analysts also expect the economy to have returned to expansion this quarter.

The Bank of Japan, meanwhile, is expected to keep interest rates unchanged at ultra-low levels during the last months of Governor Haruhiko Kuroda’s tenure.

Still, analysts are concerned about how the economy will weather a global slowdown prompted by tighter central bank police elsewhere in the world. Cautious moves by China to relax its virus restrictions offer one of the few points of optimism over the coming months.

“External demand is also be on the wane, as we saw in industrial production,” Taguchi said. “The situation may change if China lifts its zero Covid policy, but for now Europe and the US are bracing for the impact of an economic slowdown in the wake of interest rate hikes.”

Economists expect private sector spending and services consumption to support the economy this quarter. Pent-up demand held over from the summer Covid wave has already fueled consumer outlays, though the recent resurgence of infections will likely start to limit those gains. The government is widely expected to keep the country free of virus-related restrictions to maintain economic activities.

Inflation is growing as another concern for consumption and the recovery path. Japan’s price increases hit their fastest clip in 40 years in October, and the pace likely sped up further in November based on last month’s Tokyo data, a leading indicator for nationwide trends.

Business spending didn’t get revised up as expected but still showed resilience in corporate sentiment despite a yen slide that prompted government intervention in currency markets. The plunge in the yen over the summer may give companies second thoughts about their business plans.

Still, the yen’s recent pullback may reassure businesses going ahead and should also have a favorable impact on net trade this quarter.

Another positive development is that Japan fully reopened its borders to tourists in October. That offers the prospect of renewed inbound spending by visitors attracted by cheaper travel expenses thanks to their relatively stronger currencies.