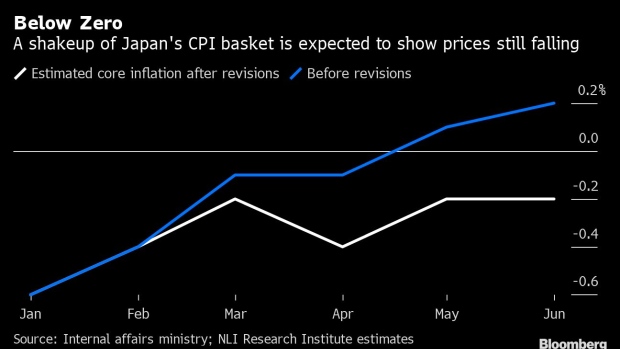 (Bloomberg) -- Japan’s inflation looks set to drop below zero again as a re-shuffling of items in the consumer-price basket highlights Prime Minister Yoshihide Suga’s focus on votes rather than price growth.

Sharply reduced cellphone charges pushed by Suga are set to get a larger weighting in the inflation calculations after a twice-a-decade revision. The update aims to ensure the figures more accurately match the buying patterns of contemporary consumers.

The new weightings, reflecting the transformation of the smartphone from premium product to must-have gadget, will also introduce tablets such as iPads into the mix to replace electronic dictionaries. The new calculations will be used to revise recent price data, with the results due later Friday.

A weaker showing for inflation will further demonstrate how Suga’s policies have pushed down on prices in the short-term instead of up. Softer prices will also likely add to the view that the Bank of Japan will keep its stimulus in place for years to come despite the inflation fears experienced elsewhere in the world.

“It’s very likely inflation will fall back into negative territory,” said Yoshiki Shinke, chief economist at Dai-Ichi Life Research Institute. “It’s rare that this many special factors swing the data around in such a profound way.”

Economists at SMBC Nikko Securities and at Dai-Ichi Life, including Shinke, expect the revision will cut the key readings by about 0.3 percentage point. That means consumer prices excluding fresh food, the measure the BOJ uses for its inflation outlook, would likely push June’s figure down to -0.1%, extending the run of falls to at least 12 months.

Even before the re-weighting, the drop in cellphone charges of 28% in June had sliced more than half a percentage point off inflation, as Suga looked to free up more household spending money with an election looming in the coming months. That impact will now be amplified.

“Suga’s priority is to put money into consumers’ pockets to boost his popularity,” said Nobuyasu Atago a former head of price statistics division at the BOJ and chief economist at Ichiyoshi Securities. “The 2% target has become symbolic for the government to show its determination to avoid deflation, but it’s no longer actively trying to push up prices.”