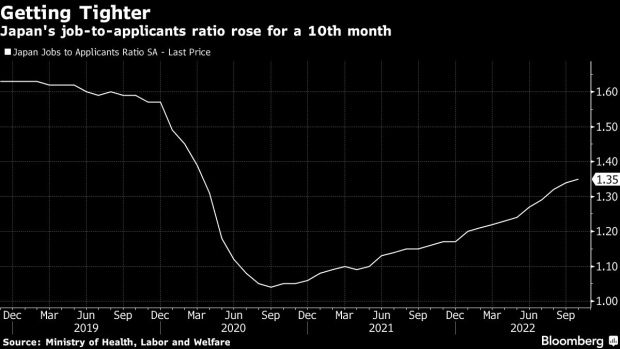 Morning commuters walk along a street in the Shinjuku district of Tokyo, Japan, on Thursday, Feb. 10, 2022. Japan’s wholesale power rate spiked as a forecast for potentially heavy snow in the nation’s capital this week may boost heating demand. Photographer: Kiyoshi Ota/Bloomberg , Bloomberg

The job-to-applicants ratio climbed to 1.35 last month, meaning there were 135 jobs offered for every 100 applicants, the labor ministry reported Tuesday. It was a slight rise from 134 positions a month earlier, and matched the economists’ forecast.

A separate report also showed the unemployment rate remained low in October. The jobless rate stayed at 2.6%, according to the ministry of internal affairs. The number of people with jobs increased by around half a million compared to the year before, led by gains in the hospitality and medical sectors.

“The labor market is certainly tightening, but if you look at details, you see many openings in the service sector whose pay scale is low,” said economist Takeshi Minami at Norinchukin Research Institute. “In that sector, wage growth will be big in terms of percentage figures, but to get a 3% raise in the entire labor market, you’d need nearly a 5% raise in the spring wage negotiations including regular pay hikes.”

While the figures suggest the strong labor conditions will keep upward pressure on wages, they still show tightness in the labor market remains well below pre-pandemic levels. Those numbers failed to produce the wage gains sought by Bank of Japan Governor Haruhiko Kuroda, who has repeatedly maintained that Japan needs paychecks to grow at around 3% to meet the central bank’s 2% sustainable inflation goal.

For the BOJ to move away from its current accommodative policy, the labor market may need to strengthen further to encourage firms to raise wages at a faster pace. Whether gains can continue will partly depend on how the global economy fares, with the outlook appearing increasingly gloomy.

The government is already making some efforts to push up pay. Prime Minister Fumio Kishida announced a 71.6 trillion yen ($514 billion) economic stimulus package last month that includes incentives for businesses to increase wages and help support the economy, in addition to anti-inflationary measures.

“Japan’s labor market isn’t as strong as the rise in October’s job-to-applicant ratio suggests. The shadow unemployment rate, which includes people who were employed but not actually working -- increased. That points to leeway for companies to shed staff.”

A separate data report showed retail sales grew at a slower pace of 0.2% in October compared with the previous month, as accelerating inflation cooled households’ appetite for shopping. Economists had expected gains of 1%. Department store and supermarket sales rose 4.1% from a year earlier.

“With inbound tourism resuming, consumption is holding up,” said Norinchukin’s Minami. “But wages are failing to keep up with inflation, cutting into incomes. That’s going to limit consumer activities.”

More details from the report:

--With assistance from Keiko Ujikane.