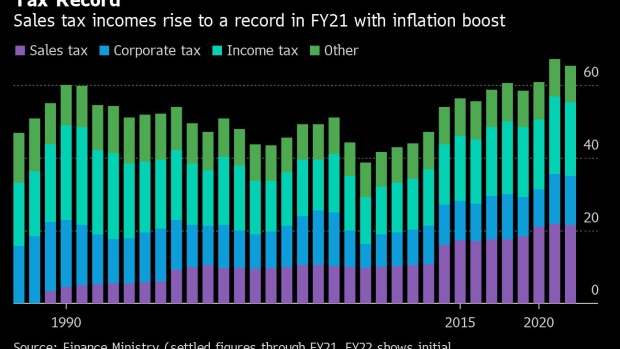 Pedestrians in the Otemachi district of Tokyo, Japan, on Friday, July 1, 2022. The government issued a heat stroke alert for several regions in the country including the nation’s capital, urging people to take health precautions amid scorching temperatures. , Bloomberg

(Bloomberg) -- Japan’s tax income for the year ended March rose to a record for the second year running, as corporate earnings and incomes jumped amid the ongoing recovery from the pandemic.

Tax income for the latest fiscal year was 67 trillion yen ($492 billion), according to a Finance Ministry release Tuesday. With an unexpectedly large jump in sales and corporate tax revenues, overall revenues increased by about 10% from last year’s record of 60.8 trillion yen.

The positive numbers suggest Japan’s recovery may be stronger than expected, and that less debt issuance may be needed if tax revenue levels hold. Still, the gains from levies aren’t enough to lessen Japan’s mountain of debt and the country will need to keep issuing government bonds to make sure its social security system remains funded.

Sales tax income for the year ended March was 21.9 trillion yen, rising 900 billion yen from the previous year and reaching a record. Corporate tax increased to 13.6 trillion yen, while income tax climbed to 21.4 trillion yen, the data from the ministry showed.

For the year beginning this April, the government expects overall revenues of 65.2 trillion yen, but that figure may be revised up if last year’s trend holds.

As a result of the higher levels of tax income the government will be issuing 8 trillion yen less new government bonds, MOF said.