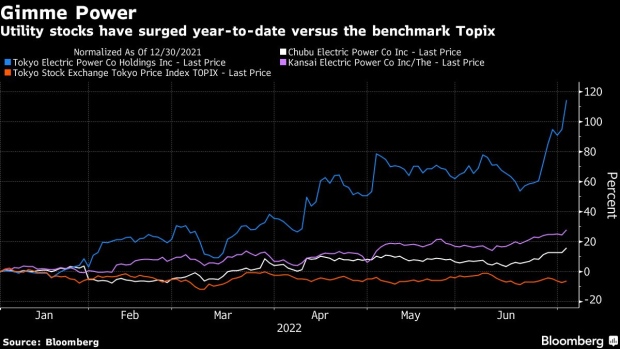 Electric fans for sale at an electronics store in the Yurakucho district of Tokyo, Japan, on Friday, July 1, 2022. The government issued a heat stroke alert for several regions in the country including the nations capital, urging people to take health precautions amid scorching temperatures. , Bloomberg

(Bloomberg) -- Shares of Japanese utilities extended a rally on the back of hot summer weather that is driving demand for cooling and pushing spot electricity prices higher.

Investors are seeing an opportunity from Japan’s power crisis. Temperatures in Tokyo soared last week, resulting in the most severe heatwave for the end of June in records going back to 1875. Electricity prices are expected to remain higher for much of the summer, as scorching hot weather in July and August may envelop the entire country.

The wholesale power spot price for Tokyo has been higher than other regions for much of last week, which is slated to boost Tepco’s profits. The nationawide wholesale spot power price for next-day delivery was priced at 32.45 yen a kilowatt-hour on Monday.