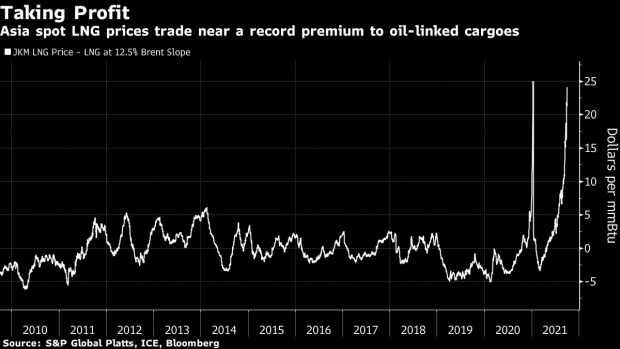 Vessels typically chartered by Japanese companies including Jera Co., Tokyo Gas Co. and Kyushu Electric Power Co. delivered as many as six spot cargoes to Chinese ports in September, said BloombergNEF analyst Lujia Cao. State-owned Chinese firms are among the buyers that have negotiated purchases, including Sinopec, which called a tender for November to March supplies earlier last week.

China is facing a shortage of everything from natural gas to coal, as supplies have struggled to keep up with a rebound in economic activity. That’s providing lucrative profits for the Japanese companies amid a scorching price rally. North Asia’s LNG spot benchmark has surged to a record high $34.47 per million British thermal units amid intensifying global competition between China and Europe for the super-chilled fuel.

Faced with a shrinking population and increased nuclear power generation, Japan -- the world’s top LNG importer -- has seen declining demand for natural gas. After getting caught flat-footed by last winter’s frigid temperatures, the utilities are now finding themselves in a sweet spot.

Japanese importers have been facing slower demand than usual from August as the weather has been milder than expected, reducing air-conditioning use in urban cities including Tokyo. That’s left them sitting on seasonally high inventories as they maximize supplies to avoid a repeat of last winter. The result is a perfect scenario for taking advantage of the rally in prices.

The utilities have purchased a surplus of cargoes on long-term contracts linked to oil indexes that are almost $25 per million British thermal units lower than the price of spot shipments. Reselling oil-linked shipments into the spot market -- as with the China deals -- is a lucrative opportunity, as the spread between those two is near a record high.

“I expect to see cargoes sold by these companies through October and November with an upside of $75 to $85 million profit per cargo,” said Felix Booth, head of LNG at energy-intelligence firm Vortexa Ltd. “China’s buyers are much more exposed to the spot market.”

While it’s unlikely that Japanese utilities will give up their cargoes during the peak months of January and February, when temperatures are typically the coldest, at least one cargo has been sold for March delivery to China, traders said.