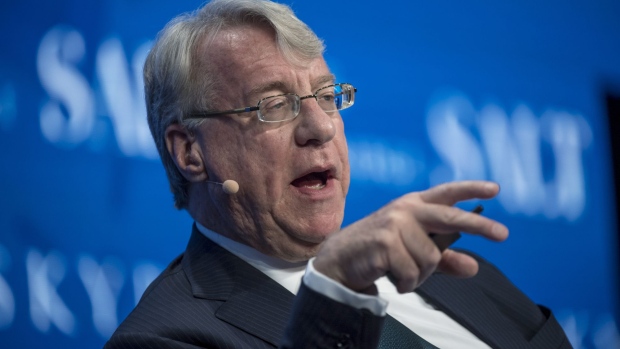 Jim Chanos, founder and president of Kynikos Associates LP, speaks at the Skybridge Alternatives (SALT) conference in Las Vegas, Nevada, U.S., on Thursday, May 18, 2017. The SALT Conference facilitates balanced discussions and debates on macro-economic trends, geo-political events and alternative investment opportunities for the year ahead. , Bloomberg

(Bloomberg) -- Responding to a comment after Ed Yardeni’s Op-Ed in the Financial Times yesterday that argued the Fed may already be at a neutral rate, Jim Chanos, the founder of Kynikos Associates, said that the market already believes the Fed will be easing monetary policy in early 2023.

He followed up by saying that strategists calling the notion of the Fed easing so quickly a “variant perception” seem to lack awareness of the futures market.

Finally, in response to the comment that the futures markets are only relevant if you believe they do a good job of predicting forward spot rates, Chanos replies that while they are coincident indicators, the idea of the Fed ending its tightening is obviously not “out-of-the-box” thinking.